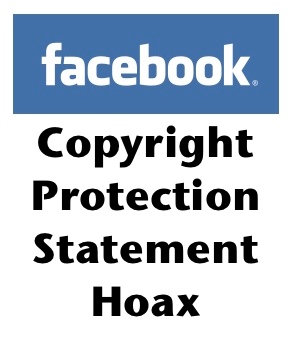 New York, Jan 7 (IANS) If you have received a Facebook copyright post in your news feed warning about your private photographs and content, just ignore it.

The viral hoax that has resurfaced from 2012 says it offers protection against the social media giant’s claim to users’ photographs, videos and other content, The Independent reported.

“In response to the new Facebook guidelines, I hereby declare that my copyright is attached to all of my personal details, illustrations, comics, paintings, professional photos and videos, etc. (as a result of the Berner Convention). For commercial use of the above my written consent is needed at all times!,” the post read.

According to media reports, the “Berner Convention” mentioned in the post does not actually even exist.

The similarly named Berne convention, however, is an international agreement that has been protecting literary and artistic works since 1887.

The post also promises that if a user does as instructed, he or she will be “placed under the protection of copyright laws” and that Facebook will be forbidden from claiming ownership of their content.

According to Facebook spokesperson Andrew Noyes, “We have noticed some statements that suggest otherwise and we wanted to take a moment to remind you of the facts – when you post things like photos to Facebook, we do not own them.”