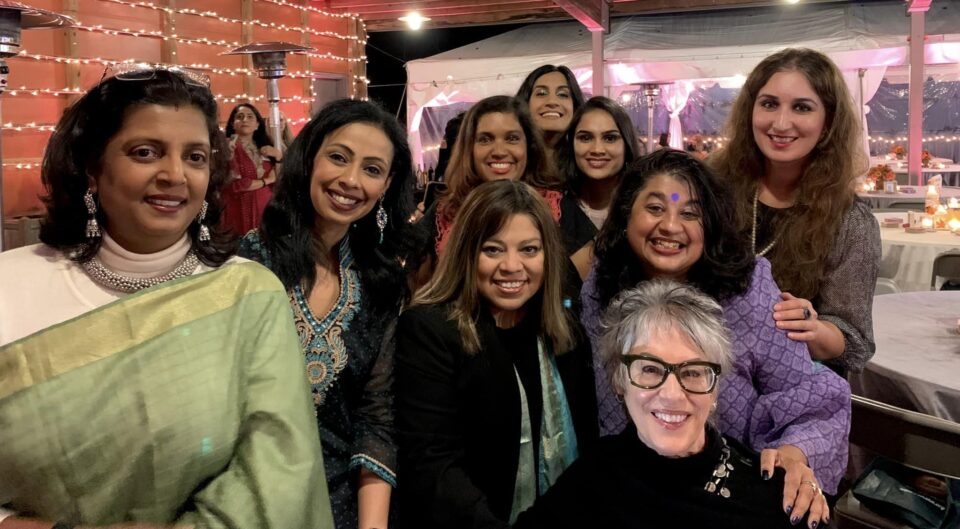 Atlanta, GA, December 9, 2022: This year, Raksha, Inc., an Atlanta-based nonprofit that works for healing, justice and empowerment for survivors of violence in the South Asian community, held its annual event, “Ek Shaam Raksha Ke Naam” on Friday, November 11th at a gorgeous outdoor pavilion at the Chattahoochee Nature Center in Roswell, GA.

This year’s theme, “Rooted, Resilient, Rising,” captured the night perfectly.   The event not only celebrated and recognized Raksha’s important work but also appreciated members of the community who have served Raksha’s mission of a stronger and healthier South Asian community in various ways.  The night resonated with gratitude for how our community stepped up during the pandemic and helped Raksha provide over $420,000 worth of client assistance with $290,000 being in rental assistance alone. Ek Shaam Raksha Ke Naam raised approximately $50,000 net to support Raksha’s work in the community.

The evening began with a reception that welcomed Raksha’s supporters, friends, families, sponsors, members of the media and dignitaries to enjoy hors d’oeuvres and cocktails while mingling with each other after two years of virtual Ek Shaam events.

Raksha’s Board President, Nisha Kapil, welcomed guests and thanked the weather for cooperating to make the first in-person Ek Shaam Raksha Ke Naam, since 2019…finally a reality! Nisha thanked community volunteers and a newly formed Raksha Youth Group for their initiative and participation in fundraising and for decorating healing message stones for attendees to take home.

Board member, Bhavya Chaudhary, shared how the Chattahoochee Nature Center tied in with the theme of the evening. The community tended to our roots, so we could grow our branches and provide the fruits of our labor to sustain individuals who reach out to Raksha.

Executive Director, Aparna Bhattacharyya, recognized the staff for their dedication in serving Raksha’s clients and working toward their healing.  Staff members Anjali Guntur, Nisha Khan, and Fatima Wasim were presented with awards to acknowledge a five year milestone with Raksha. Each of them have actually given more than 5 years with the organization when we include volunteer or other time periods when they worked at Raksha.

Board Member, Tina Thapar, introduced the Ramesh and Vijaya Bakshi Community Change Award winner, Wessex Hotels, for their continued partnership with Raksha over the years.  They hosted a volunteer lawyer training at their hotel and helped us with advocating for I765V regulations, which is the relief for abused H4 spouses.  Raksha clients have been supported by emergency and short term accommodations and the staff, while maintaining confidentiality, ensured that clients had cultural specific access to food and groceries.  This year, Wessex Hotels renovated a couple of rooms specifically for Raksha clients by adding kitchenettes to make sure that the rooms are suitable for our clients’ needs. Wessex Hotels have also connected Raksha with apartment owners to address barriers many survivors have with meeting application requirements for safe housing. Wessex was recognized for their efforts in ensuring that survivors have safe emergency, short term and long term housing.

Manisha Lance presented the first “Seeds of Change” award, which was presented to Sukanya Kar Bhowmik for her advocacy efforts to meet the needs of the Rohingya community.  Sukanya’s work with this underserved community is exemplary and she has dedicated her time and resources in meeting their diverse needs.  Sukanya has gone above and beyond in advocating for Raksha’s clients by making sure that their needs are being met. Since Sukanya spoke their language and had a good understanding of their culture, we relied on Sukanya in assisting clients from the Rohingya community.

Aparna presented the second “Seeds of Change” award to Suraiya Sharker for her work in organizing and bringing culturally competent domestic violence training and resources to Bengali, Burmese, Arab, and Vietnamese women who she was working with on reproductive justice issues in Clarkston.  Suraiya has worked extensively around reproductive justice issues and felt the need to add domestic violence training based on needs she heard in the community. Even after leaving NAPAWF, her impact was especially felt by the Bangla women she worked with and she kept wanting to find a place to keep these women engaged and address domestic violence needs in the community.  Many of the women she worked with needed support because they were experiencing DV or needed resources. She reached out to Raksha to offer culturally competent resources to give the Bengali women the tools they need to advocate for themselves and their families. Suraiya was recognized for her extensive work around reproductive justice issues and incorporating domestic violence training in the community.

The “Himmat (or Courage)” award was next presented to one of Raksha’s community partners, Cherokee Family Violence Center (CFVC).   Even before they created their Multicultural Services Program and took on the Spanish Speaking domestic violence hotline,  CFVC has always been a strong advocate for immigrant survivors.  They have always been amazing with survivors that we have both served and taken strong stands to ensure safety and justice for immigrant survivors.   We remember them taking a stand when their county wanted to create barriers for certain immigrant communities in accessing housing.  They are leaders in Georgia and have developed innovative and holistic programming for all survivors and their families.  They were critical during the pandemic in helping us when we reached out for housing assistance. They provided support for an immigrant survivor and her family as well as helping us to connect to right offices in the aftermath of the Atlanta Spa shootings. This survivor was erroneously detained and had unnecessary gynecological surgical procedures performed on her while detained. CFVC is a great partner to many communities and this honor is long overdue to this amazing organization. They exemplify courage everyday when it comes to speaking out and up for all survivors.

After the awards portion of the evening, Aparna introduced Niraj Sharma, whose family was involved in Raksha’s establishment.  Niraj introduced the professional artists for the musical portion of the evening…the Brown Jovi band and and special guests.  The band consisted of lead vocalists, Tanweer Mian, Amol Khanapurkar and Geethu Venugopal.  The instrumentalists were Asif Hafeez (keyboard), Gurinder Negi (guitar), Sai Ravishankar (flute), Rahim Shariff (percussion) and Niraj Sharma (tabla).  Brown Jovi has performed in Disney’s Ms. Marvel series and has quite a fan following! Despite the artists’ busy performance schedules, the band has graciously donated their time and talent in support of this year’s  Ek Shaam event and for past Ek Shaam events.  The band began with some popular 80’s hits  from none other than Bon Jovi and the audience was mesmerized by the mash-ups and energized by the music.  Once on their feet by the stage, the audience could not stop dancing and continued to request the band to play their favorite desi tunes. Needless to say, Brown Jovi was a big hit!

“Raksha is very appreciative of the entertainment provided by these compassionate band members who have always been such great supporters of Ek Shaam and Raksha from the start,” the organization said, through a press release.

The décor was graciously curated by Sangeetha Sheth, Tina Thapar with floral arrangements donated by Designs by Her, keepsake candle and inspiring rocks painted by community volunteers from Raksha, ,Raksha youth, and WOW(Women for Women).  The food was donated by Naanstop and dessert donated by Chef Dinesh Café.

Raksha’s staff and board are greatly appreciative of the generous support from community members and sponsors and of the time and energy from volunteers in making this 24th “Ek Shaam Raksha ke Naam,” a huge success.  The evening was dedicated to all who utilize Rakha’s services; their strength and courage is truly inspiring!

“On behalf of the clients we serve, we are thankful to you, our supporters, for helping to make the lives of our clients better, in both tangible and intangible ways,” said the press release issued by Raksha.

“Raksha is grateful for the support of our sponsors in helping to make this evening, celebrating survivors and those that support them, possible.”

As Ek Shaam Raksha Ke Naam is Raksha’s annual fundraiser, there continues to be a call for financial support so that Raksha can continue to meet the unique needs of Raksha’s adult and child clients.   Please connect with Raksha at www.raksha.org to get involved.

Preity Zinta a star attraction at 20th Festival of India