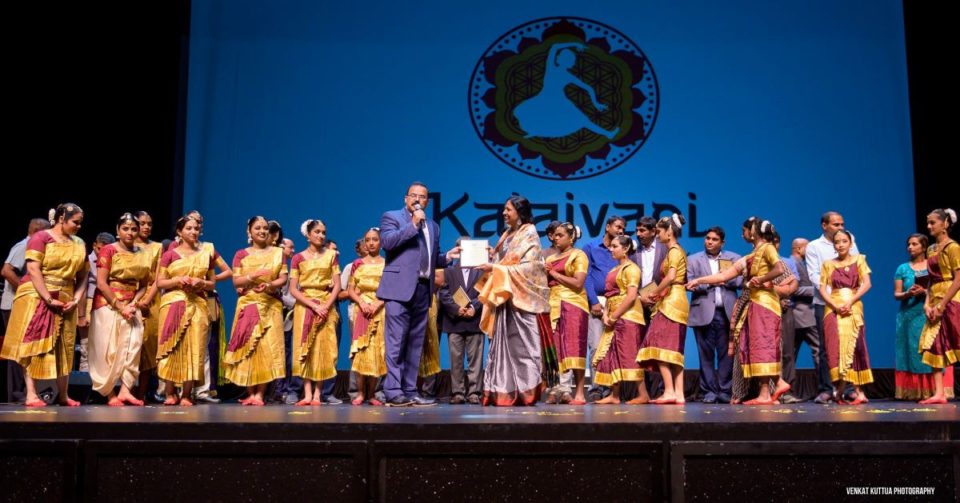 Atlanta, GA, October 9, 2019: An artistic fundraiser for Sankara Nethralaya (SN) USA’s Atlanta Chapter, aptly titled DrishTi, presented by students of Kalaivani Dance Academy (KDA) under the guidance of Guru Padmaja Kelam and Siddarth Kelam raised $200,000 for the foundation at the Infinite Energy Center on September 8, 2019. The drive was focused on supporting the ‘Adopt- a- Village’ and ‘Mobile Eye Surgical Unit’ (MESU) programs of the organization.

Emcee Jayakiran Pagadal was in his element as he welcomed attendees in multiple Indian languages. Introductory roll ups shed light on various programs of SN, including partnering with Google to detect diabetic retinopathy in a matter of minutes, using the search giant’s AI Algorithm.

In their address, Atlanta Trustee Srini Reddy Vangimalla, President Indurti and Vice President Moorthy Rekapalli stressed upon the significant contribution of Sankara Nethralaya in remote villages in India through the fundraising efforts across the board.

“Having vision is one thing. Being blind and having vision is a whole different concept,” quoted Siddarth about the idea of DrisTi. The story of Hansini was his creation, with co-choreography and Nattuvanga by his mom, Padmaja.

DrishTi, meaning vision, unearths the vision of the world through the eyes of protagonist Hansini who loses her eyesight in a mishap. Arrogant and insensitive to other’s feelings while she had eyesight, Hansini struggles with her loss initially. She eventually comes to the realization that it is her Antar Drishti that invokes eternal bliss, and what she visually saw was a very speck of what human heart can hold and comprehend.

“This is a collaboration two years in the making between KDA and Sankara Nethralaya and also between 3 cities with lyricist Dr Uma Eyyuni in Nashville, composer Asha Ramesh in San Jose, and Siddharth and me in Atlanta,” said Padmaja, adding she was honored to have the opportunity after her conversation Dr. Seshu Sharma.

Padmaja and Siddarth’s expertise and experience as creative directors and dance exponents came alive as 22 Students of KDA portrayed Hansini’s transformative journey with tender loving care, in a refined confluence of classical and contemporary with the story in a modern setting and presentation rooted in classical Bharatanatyam.

SN’s MESU program provides a stable, self-sufficient mobile platform that guarantees a controlled and sterile environment for performing cataract surgery in rural locations with no basic amenities. With a reverse osmosis plant for sterile water, an air handling unit for sterile air, hydraulic jacks for the vehicle to maintain stability and a generator set, the MESU is completely equipped and safe to ensure there are no infections. The surgeries are performed free of cost, and the patients can return home a few hours after the procedure.

“Thank you, Atlanta community and all volunteers, for making this as a memorable event in the history of the Trust,” said Mr. S V Acharya, President Emeritus and founder of Sankara Nethralaya OM Trust, who was unable to attend the event, conveying his message over phone. Hailing Atlanta chapter one of the most active chapters in US, he thanked all Atlanta trust members and KDA.