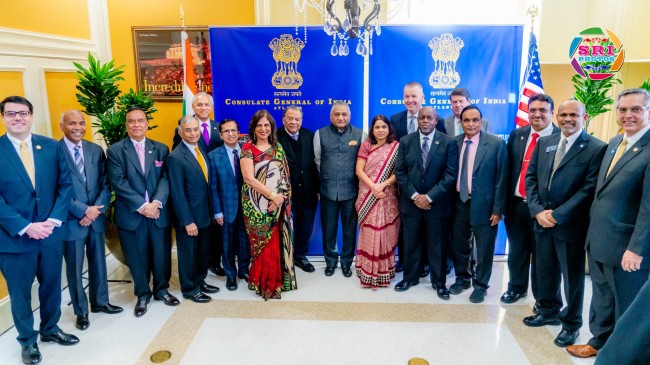 The chief guest, along with Consul General Dr. Swati Kulkarni and dignitaries, kicked off the inauguration with the traditional lighting of the lamp. Consul Shailesh Lakhtakia, Head of Chancery anchored the proceedings.

“It is most heartening to see such luminaries taking part in these activities” said Gen. Singh addressing the guests.

Passport Seva Project (PSP) is part of the flagship Global Passport Seva Program, launched by the Ministry of External Affairs (MEA) to streamline passport delivery services to Indian citizens inUnited States. The undertaking, first inaugurated outside India at the High Commission of India in London on 24 October 2018, will be implemented in the country’s embassies and consulates worldwide in the next few months. Singh inaugurated the project at the CGI New York on November 21, and CGI Washington DC on November 24, 2018. The launches for the project at the CGIs in Houston,Chicago and San Francisco are slated in the upcoming weeks, said Gen. Singh.

The NIACC is an umbrella organization that provides a sustainable platform and leadership forum for the governments and businesses of the US and India, to exchange ideas, interact, and promote economic development. Student friendly programs such as E-mentoring provides students role models across the country. The Youth Entrepreneurship BizFest platform provides tools to succeed in business.

“Today we have 365 passport functional offices and our goal is to establish these offices in each of the 543 parliamentary constituencies,” he added. The MEA, he said, entered into an agreement with the postal department to open services on their premises to ensure that a citizen doesn’t have to travel beyond 60 kms for passport services.

“In New York I was told someone got their passport within two days of application and within two weeks in DC,” said Singh, crediting improvements in procedures and timelines to digital linkages withIndia’s data center. Singh joked that people in Mumbai, where Dr. Kulkarni served earlier, get into panic mode upon receiving a text message that their passport is being dispatched soon after they reach home from the passport application.

These rules had been simplified to a large extent with the idea that the government must trust its citizens, be it simply requiring applicants to claim clean records, or birth certificates, said Singh.

“We have almost 100 million passports issued this year,” the minister added, while commending their digital partner TCS who he said had done a great job integrating the project.

Inaugurating the Atlanta chapter of NIACC, Gen. Singh said, “The chamber will help in bringing businesses and businessmen together, and foster ways and means in which both countries can leverage their strengths and acquire their best.”

“Today not a single village in India is without electricity,” Gen. Singh said with pride, while highlighting major milestones in the past five years which included reduced cost LED bulbs, provision of cooking gas to 700 million people and financial inclusion of people who were never in the banking system, allowing zero balance accounts and channeling government aided funds through the banking system.

“The partnership between oldest and largest democracy is always welcome,” said Gen. Singh, emphasizing on mutually beneficial investment opportunities in Indi ain healthcare, infrastructure, environment sectors among others. “You are the foremost country that has the technology and therefore we look forward to your friendship, partnership to leverage this great strength US has in entrepreneurship, experimentation, technology and innovative spirit,” he said.

Gen. Singh also put in a word for the annual Pravasi Bharatiya Divas to be held on January 21, 22, 23. “On Jan 24, we will take everyone to Kumbh Mela in Prayagraj and be back inDelhifor Republic Day celebrations on January 26.”

Congressman Rob Woodall, in his brief address, asked the gathering to spread the word that Atlanta, Georgia and other Southeastern states are open for business.

“The group you see right here embody the entrepreneurial, innovative spirit. This is a room full of difference makers. This is a community that does not take no for an answer, steps up and gets things done in partnership with one another,” he said.

Ambassador Young  spoke about India’s legacy of non-violence. Speaking of the historic connection withIndia, Young said Dr. Benjamin Mays from Moreshouse college was one of the attendees ofIndia’s independence in 1947 when presidents of historically black colleges were invited.

“When Dr. Mays came back and spoke enthusiastically about what had happened in India, it woke us all up,” he said.  Young commended Indian-Americans, citing Gaurav Kumar who was selected one of Atlanta Business Chronicle’s 40 Under Forty honorees for 2018.

5 reasons to fast for good health