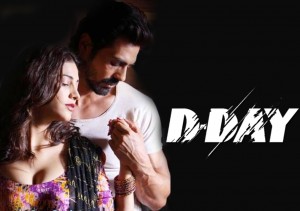 Fragrant pencils and the stench of blood… Irrfan’s character identifies flavoured pencils with his undying love for his son even when his life is soaked in the blood of traitors and other modern-day heroes. Funny, how two entirely disparate experiences can co-exist in a work of art!

And make no mistake, Nikhil Advani’s sixth feature film is an acutely accomplished work of art. It’s a thriller, yes. About the enforced extradition of a Dawood-like gangster.

But what I came away with was a haunting love story between a mysterious Indian intelligence agent and a Pakistani sex worker, both wounded and scarred for life. She in ways that we can see. He in intangible ways. But pain, at the end of the day, is pain. It’s what binds together the sex-worker and the ex-army man.

Shot in an expertly constructed brothel sets with the crowded colours of lurid sex suggesting the tragedy of lives lived in borrowed beds, the scenes between Arjun Rampal and Shruti Haasan are punctured by piercing silences and a haunting melody about love, loss and incomplete lives sung by Rekha Bharadwaj.

Later, much later, the girl is tortured to painful death by a sadistic butcher, gleefully played by Chandan Roy Sanyal.

In one of the most innovative editing techniques applied to a Hindi cinema (editors Aarif Sheikh and Unni Krishnan can take a bow), we see the scarred prostitute’s torture and death through Arjun Rampal eyes as though he were there when it happened, when he was not.

And in the background a haunting Shankar-Ehsaan-Loy song “Alvida” plays with assertive evocativeness, reminding us that the end of love is always death.

The love story could have been the entire script of Advani’s film. But “D-Day” — odd title since the antagonist is no more named Dawood — has a lot more to say, and it says it with in a tone of unfussy enrapturing elan that invites us into its midst without using gimmicky methods of enticement.

The screenplay by Advani, Ritesh Shah and Suresh Nair constructs a collage of characters hell-bent on a collision course. Though rigorously researched, the erudition sits easily, spontaneously and unobtrusively on Advani’s narration.

The story of a bunch of RAW agents on a mission in Pakistan to nab “India’s Most Wanted” is told in a tone that favours a detached distance from the proceedings while ensuring we see each character’s life in prismatic close-ups.

Though a deeply patriotic film, “D-Day” indulges in no flag-waving. The Indian flag makes one guest appearance, and that too at the end. God bless Manoj Kumar.

Every character in “D-Day”, even the dreaded caricatural Bhai (the don named, ha ha, Goldman), is a prisoner of his own lost dreams and aspirations.

The RAW heroes are thrown in our face without elaborate preamble. The very attractive Huma Qureshi as the RAW agent Zoya has her personal life in shambles. But we never see her unhappy husband. We only hear him. And we’re happy that he speaks about their distressed relationship in the voice of the very talented Raj Kumar Yadav.

Every character, visible or invisible, speaks to us in urgent desperate tones. And within 20 minutes of the playing-time we’re consumed by these doomed lives that seem to have lived on the edge forever and have nowhere to go except the abyss.

With astonishing impunity Advani sketches half-finished all his characters. These are people whose dreams can never come true.

The film’s deep affinity to the business of unfinished lives gives a cutting edge to Advani’s narration. As the plot progresses, the narration gets only more and more involving and intriguing until from Karachi we reach breathlessly to the Indian side of the Indo-Pak border where Rishi Kapoor gives a sneering contemptuous speech on the Indian government’s inability to control terrorists and terrorism.

This is as good a place as any to say “D-Day” is crammed with remarkable actors furnishing the anxious proceedings with a riveting life-force.

Rishi as the gangster is, of course, first-rate. When is he anything less? While conveying the sinister slimy side of the gangster, Rishi also gives a comic interpretation to the rotund goggled perpetrator of mayhem. Yup, this guy is having himself a blast.

The other actors too are entirely in their element. Arjun and Shruti’s tragic love story is played by the actors in muted mellow muffled shades. Arjun seems to become a more evolved actor with every role. As for Irrfan, his portrayal of a man on a suicidal mission trying to hold on to the memory of his wife and son is so vivid you can touch his anguish.

Newcomer Sriswara is extremely credible as Irrfan’s wife, while Huma as the third member of the RAW team is effortlessly appealing and effective.

Newcomer Akaash Dahiya as the fourth RAW team-member is so much on the edge, you want to hold him back from toppling over.

The cinematography by Tushar Kanti Ray uses cluttered garish spaces to create a sense of spiritual emptiness during times of tremendous stress and anxiety. This is a film with world-class action scenes. But it is not an action film. It’s a film about love and loss. But it isn’t a love story.

So what is it we are looking at here? Go find out for yourself. With this one film, Advani joins the ranks of the most accomplished young filmmakers of Hindi cinema and by far Karan Johar’s Dharma Productions proudest product.