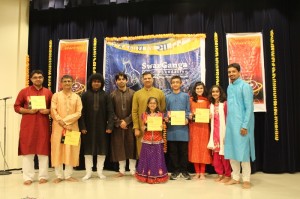 SwarGanga School of Music has been imparting North Indian Classical Music lessons to not only students in Atlanta, but also worldwide via online classes. SwarGanga is also an authorized body to conduct music exams in the Southeast part of USA under the banner of the respected Akhil Bhartiya Gandharva Mahavidyalay Mandal. The SwarGanga website is one of the largest resources of Indian Classical Music in the world. With nearly 15000 registered members, the site reaches out to more than 150 countries. 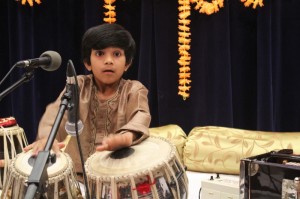 SwarGanga has also been organizing various music events around Atlanta. One such event is Crescendo, a north Indian classical music competition for the residents of US and Canada. This event opens on 1s January each year. Students are given time to prepare for the first round of the competition. The competitors then submit their entries online and are judged by various music performers all over the world. A selected few progress to the second round and a similar elimination process takes place. After two online rounds the finalists travel to Atlanta and perform with live Tabla and Harmonium accompaniment to win cash prizes and a commercial CD release.

Crescendo 2013 had a great response. After initial eliminations from among approximately 75 participants, 21 participants were short-listed for the final round. The Mega final and final event took place, at the Georgia Tech student center auditorium on August 31st & Sept 1st 2013. These 21 participants competed in three categories – below 15 years of age, 15 to 25 years of age and above 25 years of age. 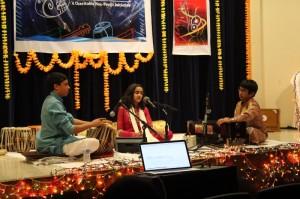 The first day started with the performances of candidates in ‘Below 15’ category. The auditorium was filled with sweet voices and lilting melodies. The candidates presented many compositions in variety of Ragas with equal grace.

But the real extravagance was Tabla Solo by Vivek Pandya. This mere 9 years old wonder-boy held the audience spellbound as his fingers spelled out very difficult, traditional compositions in Tabla which usually takes years to master – the audience gave a standing ovation to his mesmerizing performance.

Tejas Tope, the winner of Crescendo 2012, accompanied the participants on Tabla and later showcased his maturity and virtuosity while presenting impromptu Peshkar, crisp Kaydas, Gats and Rela in Teental during his solo Tabla performance after the competition. Shri. Chaitanya Kunte accompanied him on Harmonium. Srikar Ayyala a disciple of Shri. Hemant Kulkarni who travelled all the way from New Jersey accompanied all the participants on Harmonium.

SwarGanga’s entire volunteer crew worked almost nine months to make this event possible. In 2014, Crescendo is going to four cities across the United States and the Mega Final will take place in Atlanta. For more information visit www.swarganga.org.

An orange a day can keep cancer away