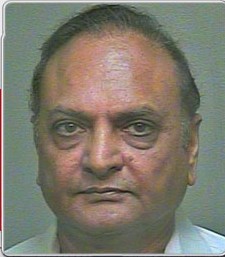 Washington, Dec 10 (IANS) A controversial Indian-American abortion doctor, Naresh G. Patel, operating in Oklahoma City since 1984, has been arrested on fraud charges for prescribing abortion-inducing drugs to patients who were not pregnant.

Patel, 62 operating the Outpatient Services for Women clinic in Warr Acres area, faces three counts of obtaining money under a false pretense, according to a media release.

If convicted, he could face up to three years in jail and a maximum fine of $15,000.

Patel was arrested after an undercover operation with three female agents pretending to be patients, whom he allegedly fraudulently identified as pregnant and prescribed an abortion-inducing drug.

“This type of fraudulent activity and blatant disregard for the health and well-being of Oklahoma women will not be tolerated,” said Attorney General Scott Pruitt.

An investigation into Patel’s dubious practices arose from a complaint that he had performed an abortion procedure on Pamela King, even though she was not pregnant.

King was diagnosed and later died from complications of cervical cancer. Her autopsy determined that she had not been pregnant in the time frame that the abortion procedure occurred, the release said.