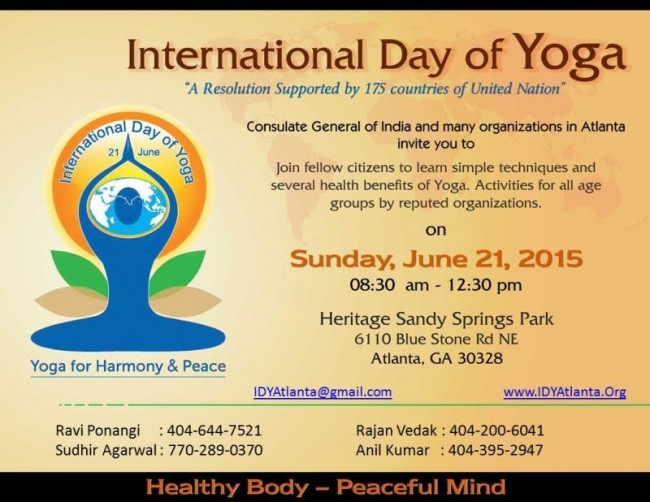 Atlanta, GA: Community organizations, yoga studios and yoga enthusiasts have joined the Consulate General of India in Atlanta to celebrate the first International Day of Yoga on Sunday, June 21 from 8:30 am to 12:30 pm at Heritage Sandy Springs Park,6110 Blue Stone Road NE,Atlanta, GA 30328.

Briefing the media, R. Srinivasan, Consul at the Consulate General of India in Atlanta said that the International day of yoga celebration would bring together a large number of elected officials and institutions to perform yoga and actively participate in free yoga sessions with demonstration of yoga postures by yoga teachers. The event at Heritage Sandy SpringsPark is free and open to the public. He appealed to interested participants to register online for free at the event website (http://idyatlanta.org) for participation. 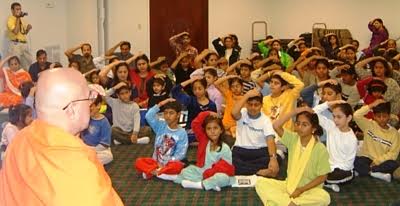 The Indian Consulate in Atlanta has planned the following activities for the celebration: Common Yoga Protocol/demonstration of common asanas; AUM Chanting; Guided meditation; Benefits of yoga for certain medical conditions; Surya Namaskar with Music; Yoga for seniors; Techniques of Praanaayaama; Importance of Yoga.

The UN General Assembly had last year overwhelmingly adopted a draft resolution, declaring June 21 as International Yoga Day. A record 177 countries had co-sponsored the resolution. The idea for declaring an International Day of Yoga at the United Nations was formally proposed by Prime Minister Modi in his maiden address to the 69th General Assembly session in September last year. He had indicated that 21 June, one of the two solstices, which is the longest day in the Northern Hemisphere, has special significance in many parts of the world, and could be considered, for adoption as the International Day of Yoga by the United Nations each year.
Yoga has always intrigued the West, but now high-profile fitness freaks have their own gurus and patronize yoga centers that have sprung up everywhere. Yoga is being sold as a mantra that can alleviate suffering and achieve “balance” to combat stress.

In India, the country of its origin, it is being looked at with renewed interest and is emerging as a dynamic new-age exercise. Practiced for over 5,000 years, yoga is a peaceful approach to mind body interaction. It is practiced to help integrate physical health with mental balance with an understanding of the world. Yoga is the new buzzword the world over. People from all walks of life; men and woman of all ages are showing interest in the practice of yoga. According to a recent survey, 20 million people practice yoga inAmericaalone. More than 200 fitness centers have introduced yoga in and aroundAtlanta; besides other yoga learning centers at various community centers, temples and private yoga instructors. Yoga programs involve simple postures, meditation and powerful ways of transforming one’s energies to empower optimum performance in all areas of life. The practices are a proven tool for preventive and curative health, and have helped relieve many people from chronic diseases like asthma, hypertension, diabetes and arthritis. It is never too late to get started.