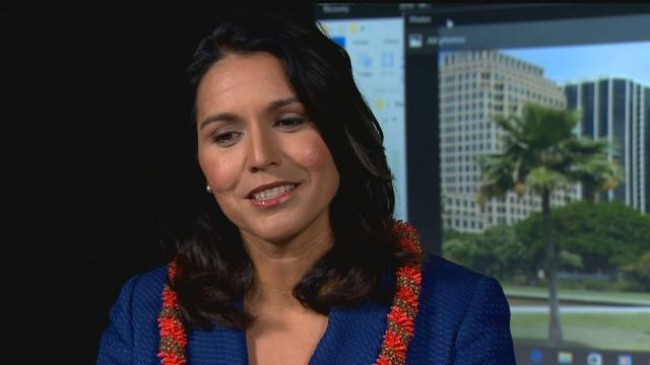 Atlanta, GA, July 29: Tulsi Gabbard, the first and only Hindu to be elected to Congress backed U.S. Sen. Bernie Sanders for president at the Democratic National Convention on Tuesday, on a day that Hillary Clinton officially clinched the presidential nomination.

The formal nominating session began with Gabbard invoking Mahatma Gandhi to formally nominate Sanders, the progressive with broad appeal.
Gabbard spoke of the revolutionary changes Sanders brought to the political discourse with his progressive, anti-establishment agenda, and said the movement would continue. She quoted Mahatma Gandhi, “A small body of determined spirits fired by an unquenchable faith in their mission can alter the course of history.”

“We will fight for the change we need and we will never forget our leader,” she said.

Gabbard resigned as the Vice Chair of the Democratic Party in February to openly work for the election of Sanders.

Here is the text of her speech:

People have asked me how a somewhat frumpy and sometimes grumpy 70-year old could become the voice for millions, connecting seamlessly with laborers in the Rust Belt and environmentalists in the West.

The answer lies in his aloha: his deep love for others and Mother Earth.

As Bernie said, “The truth is, when you hurt, when your children hurt, I hurt. And when my kids hurt, you hurt.”

This is a movement of love.

Love which calls us to care for families torn apart by our criminal justice system … to care for folks whose jobs have vanished because of destructive trade deals … to care for those barely scraping by at minimum wage or crippled by college debt… to care about our environment and future generations… to care about lives lost, lives ruined, and countries destroyed by counterproductive regime change wars… to care for our veterans who face unacceptable delays and inadequate care.

This movement of love and compassion is bigger than any one of us … it speaks to our nation’s conscience, to our hearts.

Such love opens our eyes to the truth that every hungry child is my child every worker seeking the dignity of a job is my neighbor . . . every senior citizen in need of care is my parent … an attack on anyone because of race, religion, or sexual orientation is an attack on all of us.

It’s when we care for each other — choosing inclusion and love over division and hatred — that this great country is at its greatest.

Let us draw inspiration from the words of Mahatma Gandhi: “A small body of determined spirits fired by an unquenchable faith in their mission can alter the course of history.”

My friends, because this is a movement fueled by love, it can never be stopped or defeated.

On behalf of millions inspired by aloha, determined to seek a future rooted in love, compassion and justice, and dedicated to a government of the people, by the people, and for the people, I am honored to nominate Bernie Sanders for President of the United States.”