Atlanta, GA, November 9, 2018: Dignitaries, leaders, prominent members and representatives of various communities across GA gathered together to welcome the new Consul General of India in Atlanta, Dr. Swati Vijay Kulkarni. The dinner reception was hosted by the Federation of Indian-American Associations of Georgia (FIA) at Ashiana Banquet Hall in Global Mall on October 6, 2018.

Anchored by Anjali Tripathi, the evening kicked off with the traditional Shankhnaad (conch) followed by the national anthems of India and USA. The very graceful Samta Savla of Nritya Natya Kala Bharti opened with a Ganesh Vanadana along with semi-Bollywood and an energetic ghoomar performances spaced through the night.

“Sab ka Saath, Sab ka Vikas” (When you get everyone together, everyone grows together) said Vasu Patel quoting Girsh Bhai, ex-Gujarati Samaj President. The theme resonated through the evening as Patel emphasized the need to present a united front to make Indian-American voices and concerns heard, especially in the political arena.” There are more than 180 Indian associations in GA. We have to bring everyone together. We want to present a united front and not be divided into groups. Collectively we can do anything. Politicians listen to those who vote for them. Let us Increase our voting power. Register to vote. Only then we can make a difference,” urged Patel.

“This is a historic evening as we welcome and showcase our diverse group of community to our new Consul General of India, Atlanta,” said Rina Gupta who introduced Dr. Kulkarni. 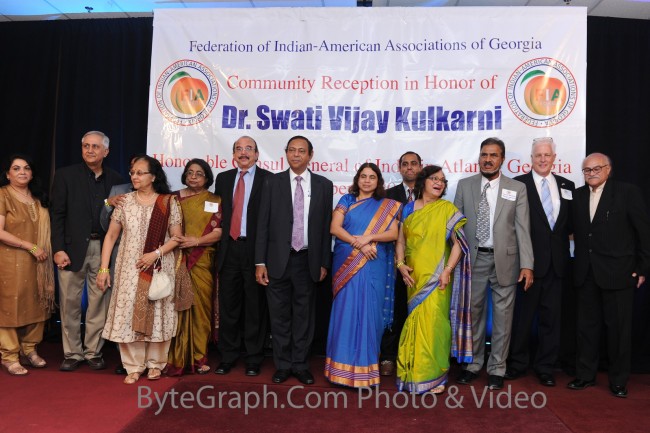 “We are your first point of contact. Any Indian knocking on our doors, please know that we are here for you” she said.

“We want to have your power united as soft power or smart power. The Ministry of External Affairs wants to harness diaspora capital,” she said, highlighting the significance of collaborations and contributions from nonresident Indians as a single entity.  She also noted that it was not all about economics. “We have 3.1 million Indian-Americans here in the US and 30 million Indians abroad bringing in about 70 billion remittances. But it is not all about economic prospects, but also the knowledge, culture, social ideas, practices, political leaderships that you have adopted and succeeded – we need to harness all these potentials. We can do it only though collective power.”

Quoting Indian PM Modi that every Indian abroad is a diplomat, Dr. Kulkarni urged overseas Indians to work in partnership and collaborate with the Indian and American governments.

Congratulating her predecessors’ achievements in setting up the Consulate, Dr. Kulkarni said her immediate agenda included building a superstructure, along with other important goals. She also announced the opening of a regional chapter of India American Chamber of Commerce in February.

“We want everyone to register at the Consulate,” she said, and went on to elaborate on how it helps building a database that can be used for various purposes, be it during natural emergencies or reaching out to communities when dignitaries from India visit Atlanta.

The new Consul General also talked about setting up an Advisory for students and new job seekers, which she said was crucial to newcomers who are unaware of the workings of America. She cited examples of false universities that promised seats such as Silicon Valley University where students returned home empty handed when it was declared non-credible. She said she would talk to students at universities to keep tab and also help out with insurance. She cited the example of a new job-seeker in Florida who went to the emergency when his daughter was hurt, only to be detained and his kids taken away when the police claimed he made some statements that implied abuse. “He did not know he had the right to remain silent. If he had, our attorneys could’ve helped him by now.”

Online submission of visa and passport fees was in the works she said and urged communities to give them two members who would be trained by them. She said those trained can help out the rest.

“Let’s go ahead and have one Diwali. Everybody will take you seriously only when you are united. It helps your cause and makes my job easier.  Our smart power should be unity in diversity. Smiling lips solve many problems,” concluded Dr. Kulkarni. As a direct result of her advice, all associations are coming together to celebrate Diwali this November.

Dr. Kulkarni is a career diplomat who holds M.B.B.S. degrees from the Government Medical College, Nagpur in India. She joined the Indian Foreign Service in 1995, served as Consul General in Cape Town, South Africa (2012-2014) and as Deputy Head of Mission in Muscat, Oman (2008-2012), two posts pervaded by projects. Dr. Kulkarni’s husband Mr. Vijay Jayant Kulkarni is a merchant mariner by profession. The couple has two daughters.