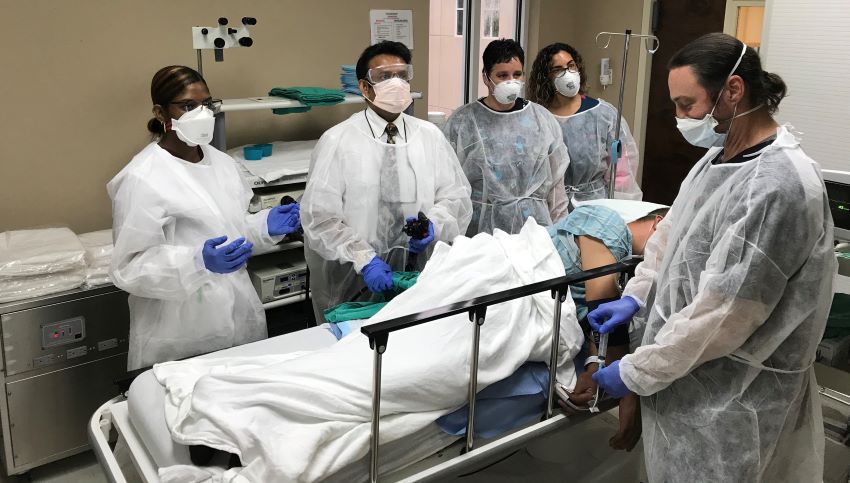 This is the third of a five-part series where noted Atlanta gastroenterologist and Emory School of Medicine professor, INDRAN INDRAKRISHNAN, MD* answers questions related to COVID-19.

Leading physicians are celebrating a small dose of good news that arrived Tuesday about dexamethasone, a cheap and widely used steroid shown to be able to save lives among COVID-19 patients. Your thoughts?

Not so fast! We have seen enough sensational scandals, walk-backs and debacles on Covid-19 therapies in the last few weeks. The success story of Dexamethasone clinical trial was announced through a press release, as opposed to an article in a peer-reviewed, internationally acclaimed medical journal. As such, this “breakthrough“ lacks scrutiny by independent medical experts. However, it should be noted that the peer review process takes from weeks to months for unbiased experts to critically analyze the manuscripts, looking for any errors in the study. This prolonged process can be an issue given the pressure to find a safe and effective drug in an expeditious manner to treat the deadly COVID-19. In the past six months, Covid-19 has sickened more than 8 million people and killed almost half a million, globally. But then, we also witnessed a fiasco when Covid-19 research results were released too quickly in the past few months which were found to be problematic later. Last week, reputable institutions had to retract a few studies they published in equally reputable journals.

This British randomized controlled study on Dexamethasone, nicknamed RECOVERY, was conducted from March until now, enrolling close to 12,000 patients in more than 175 hospitals in the UK and Northern Ireland.  Dexamethasone was found to be meaningfully effective in cutting the death rate of ventilated patients by one third. It had some beneficial effect, but to a lesser extent, on patients who were on oxygen supplementation. It had no effect on patients who did not require respiratory support.

The results of the study prompted WHO to include Dexamethasone in the treatment algorithm for Covid-19.  In addition, British National Health Service (NHS) has also now approved Dexamethasone for use in all COVID-19 patients requiring ventilation. There are many unanswered questions in this press release study. We do not have any information on the demographics of the study patients such as the race, socioeconomic conditions and other comorbid illnesses like Diabetes. For example, most of these patients were very likely whites and it is too early at this point to conclude that we can extrapolate the findings and apply a generic treatment algorithm to patients in the other parts of the world as Covid-19 infection has a tenacious ethnic predilection.

Dexamethasone is one of the several varieties of steroids and it is predominantly used to suppress inflammation.   Usage of steroids in very sick Covid-19 patients is not new at all and physicians have been using potent steroids such as Methylprednisolone worldwide with varying degrees of success.   As I explained in one of my answers in the previous weeks, Covid-19   infection, when severe enough, provokes a very complicated hyperimmune reaction in the body which eventually causes multi-organ failure and death. The theory is that the steroid will suppress this abnormal immune response and inflammation, and deter the complications.  However, these same steroids suppress patients’ own immunity as well which is necessary to fight the virus at the initial stage of the infection. As such, there is a fine line where steroids can play a vital role in the management of severe Covid-19 infection and only the physicians can make such decisions.

The good news is that Dexamethasone is cheap, and we already know the side effects well which are not alarmingly dangerous. However, the public should be aware that this drug is not for curative /routine use for outpatient Covid-19 infection. It neither kills the virus nor prevents the infection.  It’s current use and benefits are limited to deathly sick patients only. It only suppresses the abnormal immune response and inflammation and saves the patients from deadly organ complications while they make their own recovery in the ICU settings.

When a new drug therapy information is out through a press release, it is not uncommon for the public to rush to the pharmacies and clear the shelves of the sought drug during a crisis.  FDA has already observed a shortage of Dexamethasone in certain parts of the country within 24 hours of the press release of this study. So, please do not rush to the pharmacies and buy Dexamethasone in bulk or demand your physicians to write prescriptions for this medication!

Should we have more registries for convalescent plasma therapy?

Convalescent plasma treatment is not yet approved by FDA and remains an experimental therapy. However, it has shown promising results across the country, saving many lives including front line healthcare workers who became deathly sick with Covid-19.

The convalescent plasma is the liquid portion of the blood from the recovered patients and it contains antibodies to fight against the virus.

A research at Emory University last month found that almost all the hospitalized Covid-19 patients have antibodies in their plasma. The theory for the treatment is that when this convalescent plasma is given to severely infected patients, it would help to boost immunity and reduce the illness.

Currently, the numbers of new Covid-19 cases are in a downward trend and there are less sick Covid-19 patients in the ICUs.  However, as a second wave is expected in the fall and we still do not have any proven therapy or vaccination, it is important to increase the awareness of convalescent plasma among the public and encourage recovered patients to register. This will help not only to combat the disease but also bring more data to the current scientific studies as to its effectiveness and this may help in expediting the FDA approval.

Sewa International has been performing exceptionally well in helping the public during this Covid-19 crisis in many aspects and they should be applauded for their noble action of establishing an exclusive registry for the convalescent plasma in addition to Red Cross society. When one registers and donates convalescent plasma in Georgia through Sewa, it will be used to treat a fellow Georgian.

Q&A with Dr. Indrakrishnan will continue next week…

*Dr. Indran Indrakrishnan is a well-known Atlanta based gastroenterologist and clinical professor at the Emory University School of Medicine. In 2018, Dr Indrakrishnan became the first American of Indian descent to receive a commendation from former Georgia Governor Nathan Deal for his exceptional work in improving the lives of Georgians affected by colorectal cancer and other gastroenterological diseases.

Dr. Indrakrishnan is a former president and board member of the Georgia Gastroenterology and Endoscopic Society and currently sits on the Georgia Board of Healthcare Force, as well as the boards for Rainbow Village, Fight Colorectal Cancer, Meals by Grace and Hindu Temple of Atlanta. He is also past president of Georgia Association of Physicians of Indian Heritage (GAPI) and currently on the board of trustees.