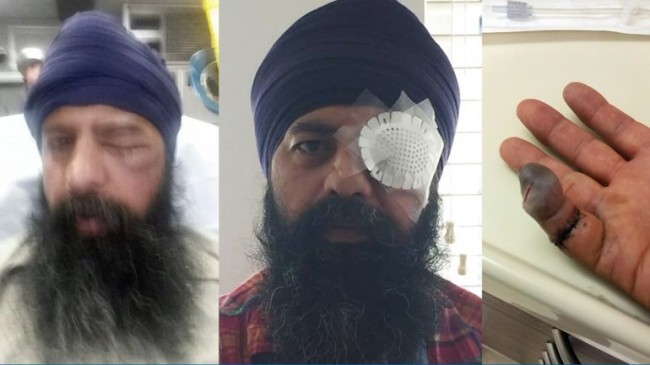 Washington, May 19 (IANS) A US court sentenced two men to three years in prison for severely beating a Sikh man in California and cutting off his hair.

Chase B. Little and Colton T. Leblanc, both of Texas, pleaded no contest to felony assault and committing a hate crime against Maan Singh Khalsa during last year’s September 25 attack, the New York Times reported on Thursday.

“Both men went out of their way to cut Khalsa’s hair, which he maintained unshorn as part of his Sikh faith, ‘making this so clearly a hate crime’,” said Prosecutor Simon O’Connell of the Contra Costa County District Attorney’s office.

Khalsa, 42, appeared before Judge Patricia Scanlon during the hearing in Martinez, California, on Thursday and recalled details of the frightening attack.

“Cutting a Sikh’s hair is one of the most humiliating things anyone can do to a Sikh. The attackers did not just attack my body, they attacked my dignity, my spirit, my faith, my religion and my entire community,” Khalsa said.

Authorities said Khalsa was driving home on the night of the attack and stopped at a red light in Richmond, near Berkeley, when a car, occupied by five people, pulled up next to him.

As beer cans were thrown at Khalsa, a motorist nearby called 911. When the light turned green, Khalsa drove off and called 911 as the truck followed him.

While he stopped at another red light, two men got out of the truck, ran up to Khalsa’s car and repeatedly punched his face and yelled profanities.

“My attackers hit me with their fists, knocked off my turban, and yelled, ‘Cut his…hair’,” Khalsa said in a statement.

“They yanked my hair through the window and used a knife to saw parts of it.”

He also sustained a black eye, tooth damage and knife wounds. Part of his little finger was later amputated because of an infection from one of the wounds, the daily reported.

Khalsa, an IT specialist at the Social Security Administration, said he emigrated from India in 2003 and always considered himself an American “like everyone else.”

“I had never worried about being a victim of prejudice,” Khalsa said.

The finding that the attack was a hate crime was crucial in this case, Prosecutor O’Connell said on Thursday. “That really sent a message to the community to say that this sort of crime won’t be tolerated and will be taken seriously,” he said.

O’Connell said Little and Leblanc had no affiliation with hate groups and had no remorse to their prison sentences.

Under Trump, a presidency declines, step by remorseless step

Half Girlfriend: Performances save this half-baked mush