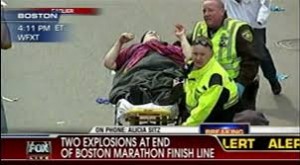 BY ARUN KUMAR
Washington, April 16 (IANS) The Boston Marathon bombings in the historic city that saw several key events of the American Revolution, such as the Boston Massacre and the Boston Tea Party, become part of violent April in US history.
These incidents include the 1993 FBI siege of David Koresh’s compound in Waco, Texas, the 1995 Oklahoma City bombing, a mass shooting at Columbine High School in 1999 and the Virginia Tech massacre in 2007.
The Boston attack came on Patriots Day, a state holiday in Massachusetts and Maine marking the anniversary of the American uprising against British authority in Lexington, Massachusetts, the first military engagements of the American Revolutionary War.
The actual battles were fought on April 19, 1775, but Patriots Day is celebrated on the third Monday in April, falling this year on April 15.
The Waco siege and the Oklahoma City bombing fell on April 19, the actual anniversary of the Battles of Lexington and Concord, CNN noted.
Time Washington correspondent Alex Altman also noted Patriots Day’s “significance” to the “militia movement” in a tweet that was shared 507 times.
The militia movement is a political movement of unconnected paramilitary groups in the United States who believe the federal government is a threat to their freedom and are opposed to any limit of the Second Amendment right to bear arms.
He also mentioned the Oklahoma City bombing anniversary. In a subsequent tweet, he clarified that “OKC was on Apr. 19, anniversary of the Battles of Lexington & Concord, which are celebrated in Mass(achusetts) as Patriots Day.”