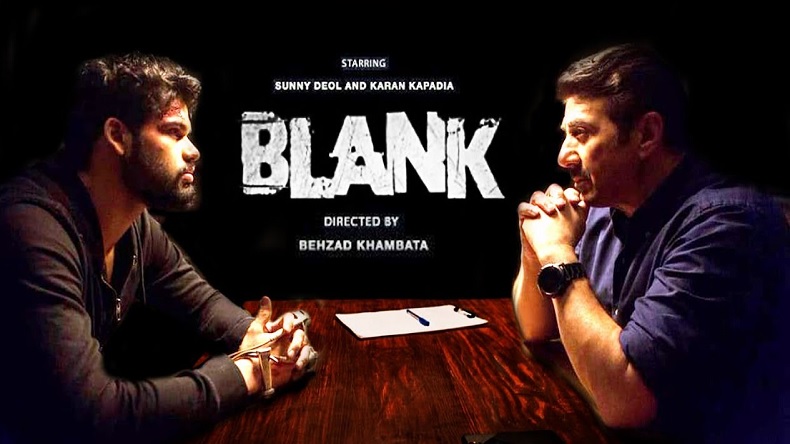 Designed as a mystery thriller, “Blank” is the drama of a suicide bomber who is on a mission.

Debutant Karan Kapadia plays Hanif, the suicide bomber who is connected with a “dead man’s switch”. This “DMS” is a complicated bomb attached to his chest and is connected with his heartbeat. The moment he ceases to exist, or in other words, when his heart stops beating, the switch would activate 24 other devices that are remotely controlled. Thus creating a mayhem in the city.

The premise is definitely intriguing.

Narrated in a non-linear manner, the film opens on a dramatic note. The plot unfolds with the suicide bomber landing in hospital and into the police’s clutches, only to be rescued soon by his brethren to check, what did he reveal to the police. This by mid-point, you wonder, is a waste of energy for a dispensable soul.

But that does not stop you from wondering what’s next? The writing is well-researched, gives you a fair flavour of the subject. The action-packed second half is fast-paced and exciting. But at the same time it leaves you realising that this is a far-fetched war against terrorism.

It is far-fetched because the denouement is totally unconvincing as the crux of the drama hinges on a plot which appears borrowed from B-grade potboilers of the 1980s. It plays to the masses with the good against the evil theme.

Another reason why the narrative does not touch your heart is because the plot fails to make an emotional connect. Apart from few tackily handled scenes, the film lacks scenes showing the physical or mental journey of the protagonist. And whatever few scenes there are, seem forced.

Also, while this is the story of the suicide bomber, the canvas appears to be that of the investigating Anti-Terrorism Squad (ATS) Officer Siddhu Dewan (Sunny Deol), who is torn between his work and personal turmoil. This sub-plot is half-baked. With nearly equal footage, in terms of drama and action, Sunny Deol, with his charismatic overload, overshadows Karan.

But there is no denying that Karan has put his heart and soul into the character he portrays. He is convincing and does a brilliant job of essaying the unassuming Hanif. He also displays his flair for action, with natural ease.

Among the supporting cast, Jameel Khan as the leader of the terrorists, Karanvir Sharma and Ishita Dutta, as part of the ATS team, are attractive to look at. But their roles are stereotypical and bland. The major twist at the end in Ishita’s character graph off-balances the tale to an object of ridicule.

Mounted with moderate production values, the film is technically sound.

Visually, the look and feel of the film is simply realistic. Cinematographer R.Dee’s camera work is definitely noteworthy.

He beautifully exploits the landscape and the period created by production designer Rajinder Sharma. The top angle shots capturing the action packed shoot-out followed by the vehicular chase in the barren fields are noteworthy.

Also, the scene where the ATS is ferreting the leader of the terrorists, is well shot. This reminds you of a scene in the Hollywood film “Zero Dark Thirty”.

What elevates the viewing experience is the loud but effective background score by Rooshin Dalal and Kaizad Gherda. The rhythmic beats of the drums with its crescendo notes injects the adrenaline flow to the accompanying visuals.

The unwarranted song, post end credits, picturized on Akshay Kumar, is like over-egging the pudding. Need I say more?