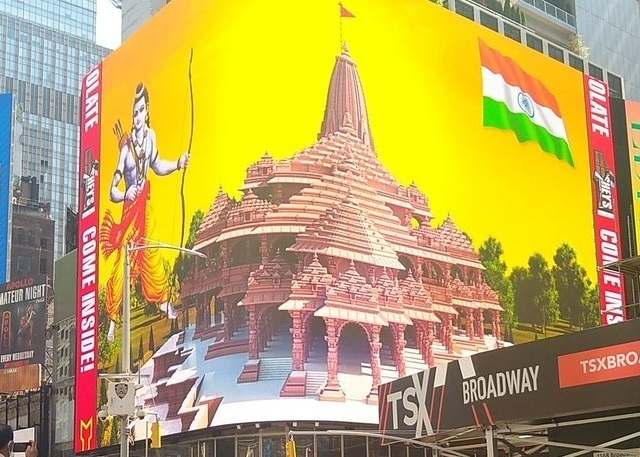 New York, Aug 6 (IANS) Hindus and their supporters in New York City celebrated the laying of the foundation stone for the Ram temple in Ayodhya, ignoring a ban on a video marking the occasion due to pressure from groups.

About 1,000 people turned up for the celebration on Wednesday evening singing ‘bhajans’ and chanting at a traffic island on Times Square, while two groups of protesters lined up on either side.

Earlier, a large video display of Ram and the temple being built in Ayodhya was turned off following protests from a group claiming it was political.

However, a video display announcing “Kashmir Siege Day” flashed across from where the Ram Janmabhoomi video was to have been shown.

The celebrations were organized by the Ram Janma Bhoomi Shilanyas Celebrations Committee of USA (RJBSCC).

A group of Khalistanis and Pakistanis stood on one side of the traffic island and protesters from the South Asian Solidarity Initiative and the Indian American Muslim Council (IAMC) stood on the opposite side shouting slogans flanking the celebration.

RJBSCC Chairman Jagdish Sewhani told IANS: “We have come to Times Square to celebrate the historic occasion of the start of the building of the sacred temple. We are not bothered by the display being shut down because we are full of joy that our goal of seeing a temple build on the holy ground is becoming a reality. What they do means nothing to us.”

He said that after running the display for several hours in the morning, the company that had the video system turned it off when groups protested saying they do not allow political advertising, even though the display did not have any political message but was purely spiritual with only a large image of Ram and the temple being built and no text.

People started gathering at the Times Square venue, wearing masks and many dressed in traditional clothes, from 3 p.m. for the celebration that started at 7.30 m.

Earlier in the day, IAMC hired a video truck to circle the Times Square with images of the mosque honouring Babar, who is said to have destroyed the original temple on the site after an invasion from what is now Uzbekhistan.