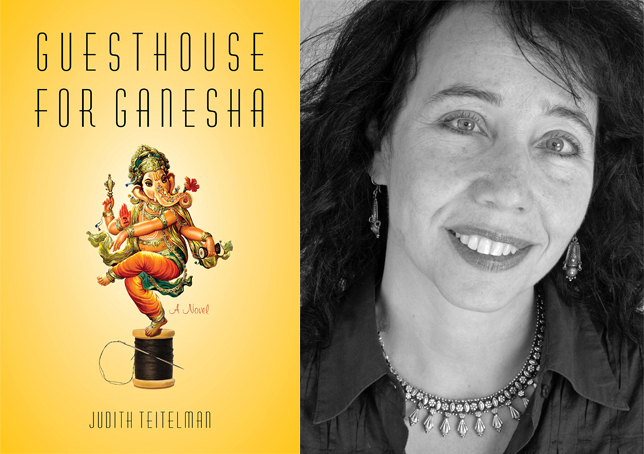 Guesthouse for Ganesha
She Writes Press
Released on May 7, 2019
Fiction – 256 pages

Judith Teitelman is the author of the newly released novel, ‘Guesthouse for Ganesha’, a riveting story of lost love, survival and spiritual awakening.

In 1923, Esther Grünspan, a seventeen-year-old Jewish girl, arrives in Germany with a broken heart. Thus begins her twenty-two-year ordeal through the holocaust and World War II when she has to assume new identities to hide her Jewish heritage, and move often through Europe to stay alive.

Esther’s pragmatism, hardened heart and masterful tailoring skills are her assets through her travails. But unknown to her, Esther’s biggest asset is the protection of Lord Ganesha, as she moves from one dangerous situation to the other, until she reaches her final destination, India.

Written with great attention to detail, Teitelman breathes life into Esther’s story, deftly weaving Hindu beliefs with the history of the holocaust. One cannot help but root for the stony-hearted protagonist, whose story unfolds in the voice of Ganesha.

In this interview with NRI Pulse, Teitelman talks about the genesis of her novel, the making of Esther, and her own connection with Ganesha.

You discovered ‘Guesthouse for Ganesha’ written in an old journal from 1983. It was a title you did not understand and had no idea of its origin. How did the novel evolve from that point?
In 1983 I had nary a thought of writing a novel. And, frankly, after I wrote the title in my journal, I forgot about it. Then, in the early 2000s, I started attending a weekly writing group. A good friend had pressured me into participating. I had no idea what I would work on and mostly flailed about with topics and words. A month or so into these weekly classes, I realized I had a title popping around in my head and it gave me a semblance of direction on those Saturday mornings to figure out its meaning. A few more months passed, and a friend’s death led me back to the journal and that entry. I was shocked to learn that the title had been gestating for nearly two decades.

Only then did I fully realize there was a story, headlined by this title, that I must tell and from that point forward was committed to its realization.

A Hindu God watches over a young Jewish woman whose journey takes readers through the holocaust and the Second World War. How did this idea come about?
This novel reflects a range of life-long interests and personal passions, especially that of eastern philosophies and perspectives overall and the Hindu God Ganesha in particular.

However, the significant spark that conceived the gist of this story was finding out, at the family lunch following my maternal grandmother’s funeral, that she had been abandoned at the altar by her true love when she was 17. I only knew my grandmother as a mean-spirited, bordering on nasty, woman. It was difficult and unpleasant to be around her. Trying to be understanding, I attributed that her experiences during WWII—having to give up two daughters, leave her husband and home, struggle to survive, etc.—had hardened her irreparably.

But, no, it had been love. More precisely, lost love, devastated love, abandoned love—something most of us inevitably experience—that had made her callous, unyielding, relentless, and self-absorbed the rest of her life. This informed all her actions. Yet also, and importantly, it made her a survivor.

Learning this compelled me to honor her ordeal.

But I felt this story must be couched in the largest context possible– reflected by, and with the views, insights, and perspectives of not just an omniscient narrator, but a Hindu God. It seemed the ideal coupling of my interests and my protagonist’s journey.

Readers see Esther Grunspan as a hard as nails, pragmatic woman who has little time for sentiments. Was her character molded on someone you know? How about Abraham’s character?
As noted above, Esther’s character was inspired by my maternal grandmother. Also named Esther. Abraham was not based on anyone I know, only imagined. I felt it important that his disposition needed to be that of a rather naïve, friendly, happy man to be a foil, so to speak, to Esther’s tough, stoic nature. The tension between these two disparate individuals was essential for moving the story forward.

Esther’s difficult journey of survival- from Germany to Holland to Frances to Switzerland and finally to India, makes for an extremely riveting read. What kind of research was needed to bring this story to life?
My research was extensive. In addition to reading a great number of history books on this period in world history, I spent seven long and difficult days over the course of the summer of 2008 watching first person video accounts at the Shoah Foundation located at the University of Southern California. This testimony provided the crucial foundation for making Esther’s experiences and the landscape she traversed as realistic as possible.

I studied the Hindu Pantheon overall with a focus on understanding Ganesha. I read religious and historical texts, academic journals, fiction, non-fiction, and children’s books about India. I wanted to learn about and capture as much knowledge as possible from a wide variety of perspectives. This part of the process I thoroughly enjoyed.

And, significantly, I’m a longtime dedicated and passionate traveler with close family in Germany and friends and colleagues around the globe. The world and its kaleidoscope of people and cultures and perspectives are a never-ending source of joy and fascination for me.

That said, I’m also very much a visceral writer, one that, as much as possible, has to, so to speak, ‘breathe the air and touch the ground’ that I write about. I’ve been to all of the countries Esther travels to, although not always the exact locations her story takes place in. I’ve been to India twice. My first trip there was focused on exploring the land Esther would cross—from Bombay/Mumbai and throughout Rajasthan.

After having her heart broken at 17, Esther is unable to love her husband or her three children, even as she fulfils her duties towards them. Although it is her stoicism that helps her survive, why should readers root for a woman who feels no empathy?
Even though Esther feels no empathy—for much of the novel—she is relatable. It is common for people to ‘shut down’ to protect themselves from painful and difficult situations in their past. Of course, this manifests in different ways for different people.

While Esther may not express empathy throughout much of the novel’s journey, the reader can feel compassion for her. And, over the course of the story’s unfolding, she does evolve, quite dramatically.

Also, hopefully, readers will feel a sense of relief and completion for Esther. Perhaps surprised by the ending and where the journey takes her, a spiritual denouement.

One of my goals and hopes is that readers become understanding of the connections and inter-connectedness between all human beings, as well as the possibility and probability that there is more—much more—than most people typically see and/or allow themselves to experience.

Ganesha chooses Esther because she is a woman who truly and deeply understands pure love. And yet, we see a woman who feels little love, and is unable to bond with anyone. I have to ask– why Esther?
Esther and Tadeusz experienced pure, true love. The type of love that many only dream of. Alas… yet not uncommonly, he got scared and ran from it… from her… from them… from the truth of who they were to one another and together.

Esther felt this love deeply and was brutally scarred by what she innately knew should have happened, but didn’t. This knowledge and truth remained within her, only deeply buried and kept as far away from her daily thoughts as possible. So she could function. Take care of herself. And her duties and responsibilities to the family she created.

Esther’s final destination is India, where she reunites with Lord Ganesha, after first seeing his image in a wooden stand near the Rheinpark in 1923. What is Judith Teitelman’s connection with Ganesha, Hindu beliefs and India?
For as long as I can recall I’ve been drawn to Eastern cultures, beliefs, perspectives, and philosophies. While not solely focused on Hinduism, over the course of my life I’ve studied Buddhism, Taoism, Sikhism, and Confucianism. Likewise, while India is one of my favorite countries to visit, I’ve been privileged to have traveled to about 16 or 17 countries in Asia and Southeast Asia. As long as I’m able, I will continue to travel to that part of the world, as well as return to India. There’s much more to visit and learn.

I have been particularly drawn to and inspired by Ganesha because of his wisdom, warmth, humor, and generosity of spirit.

The novel took 18 years to be published. Did you, at any point feel like giving up, especially since you did not see yourself as a creative writer prior to this? What was the hardest part of the whole process?
Once I ‘understood’ my story and how it needed to unfold, I began to enjoy, even relish, the challenges of writing and figuring out how to move my characters forward.

After the manuscript was finished, I turned to the search for, first, my Literary Agent, and then my Publisher. Without question, these were the hardest parts of the whole process. I was aware that I had written a different type of story and the ‘business’/getting-it-out-in-the-world end of this process was often frustrating and discouraging. I would often joke that if I pulled out the Hindu God and replaced him with a vampire or a zombie, it would have sold immediately.

Did you feel Ganesha’s presence during the long writing process.
I absolutely felt ‘guided’ and directed. And the process of writing a magical realistic novel was mirrored by various ‘magical’ occurrences. Once, when I was especially struggling with a particular topic, I received notification of a writing class on that same subject taking place within two weeks’ time. On another occasion, an opportunity to travel to a part of the world I was writing about became available. These are just two examples of many.

I am extremely attached to Ganesha, and feel I always have been. And I remain committed to honor his essence to the best of my ability. I loved invoking his voice, thoughts, beliefs, background, perspectives, and humor throughout the novel.

Do you feel a sense of liberation, now that the story is published?
I’m not sure that I feel ‘liberation’ per se, but I do feel that destiny has unfurled and there’s more to come.

Wipro’s Premji to retire on July 30, son Rishad to succeed