Atlanta, GA: Nearly 700 people representing several Indian American organizations in Atlanta gathered at Shree Shakti Mandir on June 1, 2014 to celebrate the epoch making 2014 Indian election victory of Narendra Modi and Bharatiya Janata Party (BJP). The event was organized by Overseas Friends of BJP (OFBJP) and Global Indian for Bharat Vikas (GIBV) and hosted by Shree Shakti Mandir. Never in the history of Atlanta have so many organizations come together under one roof to celebrate such a historic event.

OFBJP is an international arm of the Bharatiya Janata Party (BJP) in India with chapters in the US and elsewhere outside of India. It has been advocating the political and economic philosophy of the BJP through seminars, lectures, networking and social media.


GIBV is the US based organization with main objective of engaging the Global NRI community in helping to reshape the future potential of India as envisioned by the leadership of Narendra Modi of BJP. Its mission is to harness and pool in the strength and resources of worldwide NRIs in promoting business, trade, industry and academic interface with India and other parts of the world including USA. Its mission also is to serve as the watchdog against any efforts to undermine the progress of Indo-global cooperation.

The Indian Consulate in Atlanta was represented by the Vice-counsel Ashok Kumar who congratulated Modi and BJP for the 2014 election victory.

Following the prayers, the audience was treated to two delightful musical dances from students of Nritya Natya Kala Bharti Academy.

Welcoming the gathering, Vasudev Patel of OFBJP, Atlanta chapter narrated his five weeks’ election campaign in India. His five weeks election campaign took him to several cities, towns and villages in Gujarat where he urged the people to vote for Narendra Modi and Lotus. He concentrated his campaign in a few districts like Surendranagar where BJP was weak and expected strong challenge from the adversaries. After completing his tour in Gujarat, he went over to UP, particularly the districts of Amethi and Raebareli from where Rahul Gandhi and Sonia Gandhi were contesting. Campaigning with the BJP candidate, Smriti Irani, he covered several villages in Amethi. Patel told the audience that Narendrabhai congratulated the BJP workers for getting BJP win all 26 seats in Gujarat. He further said that Modi has very strong character and powerful will to lead India successfully with good governance. 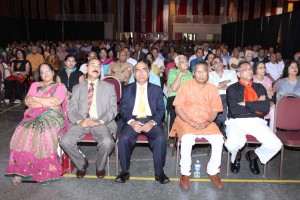 Dhiru Shah of GIBV opened his talk by congratulating Modi for his spectacular election victory and wished him success in making India as one of the most powerful countries in the world. He characterized the 2014 election as the victory of ‘Dharma’ over ‘Adharma’, victory of truth over untruth and victory of the poorest of poor of India. He said that it was a triumph of democracy over the corrupt oligarchy and entrenched dynasty. Shah told the audience that though the Modi government is facing many challenges on all fronts, Narendrabhai will be successful because he has a clear vision with the twelve years of track record. He urged the participants that as NRIs it was their dharmic duty to help Modi in fulfilling his promises made to the people of India. He suggested that one of the ways to help Modi was to adopt a village and help villagers to build infrastructures like roads, sewage, school and medical clinic. Further, he asked the audience that they should get involved in the American political process so that they can influence the US government to formulate a India- friendly foreign policy. He also urged the participants to donate generously for the election of Congresswoman Tulsi Gabbard, an American Hindu, who has fought against the anti-Modi resolution introduced recently by some members of the House.

After the two organizers’ speeches, the audience was shown two short videos of BRTS Ahmedabad and the message from Anandiben Patel, the new Chief Minister of Gujarat, for this occasion. She talked about Narendrabhai’s strong moral character, dynamic leadership, good governance which have dramatically changed the face of Gujarat. It is under his leadership that Gujarat has today become one the most prosperous states in India. She urged NRIs to help Modi and the state of Gujarat by their active participation in exchange of idea and building trade and industry using their knowledge and resources.

Following the video, the next speaker Shiv Aggarwal, President of Ekal Vidyalaya, S.E.Region, congratulated Modi and urged the participants to use the occasion to bring unity amongst all supporting organizations.

Subash Razdan of Gandhi Foundation lauded the moral character and humility of Narendra Modi and congratulated him for the election victory. He asked the audience to thank all who contributed to the success of Modi and BJP.

Other speakers included Kusum Khurana of VHP, Past President of Gujarati Samaj, Chatur Chhabhaya, Girish Mukhi, Chairman of Gujarati Samaj, Atlanta, Raju Patel of Shakti Mandir, Surinder Dhar of Shiv Mandir, Dr. Chandora of Greater Atlanta Vedic Temple, Past President, IACA, Kaushal Tripathi, Ajay Houde from HSS, Vishwanath from Seva International, Nitin Shah, past AAHOA Chairman, who all congratulated Modi and wished him success in his new job as Prime Minister of India. Raju Patel informed of the proposed renovations in the Sumant Hall and construction of Shakti Dham and invited all to attend Shilanyas Pooja on June 21st at the Temple.

Sneha Mehta, past president of VHP made an announcement about the Hindu Unity Day to be celebrated in the Centennial Park in October and requested all participants to attend it and make it a great success.

Dr. Raj Gandhi announced a fund- raiser in July at Palace Restaurant for the French Journalist, Francois Gautier who has been constructing a museum of Hindu and Tibetan history near Pune in India.

MahadevDesai, Mustafa Ajmeri and TV Asia were among the media attendees.

The vote of thanks was given by Vasudev Patel. Dhiru Shah specially thanked all volunteers of Shakti Mandir including Raju Patel, Bhopaji Patel, Bhikhubhai Patel, Pravin Master for helping organize the event.

The participants were then treated to a delicious and sumptuous dinner, courtesy of Shakti Mandir.