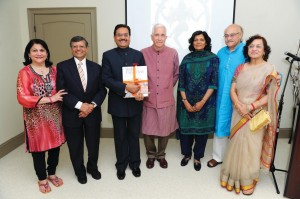 Atlanta, GA: Ambassador Ajit Kumar, Consul General of India, Atlanta, Georgia hosted a reception at the Atlanta Consulate on Thursday, May 22 marking the official release of the expanded Sixth Edition of the well-known, multi-award-winning book, India Unveiled: Spirit, Tradition, People by Robert Arnett in which India is presented in all her richness and diversity for the readers to relish and to savor.

“The new edition of ‘India Unveiled – Spirit, Tradition, People’ written by renowned writer Robert Arnett, is one of the best books written any foreign writer on India,” remarked Ambassador Kumar. “It captures the essence of Indian civilization and its traditions.  His extensive travelogue portrays a beautiful depiction of the India’s people and culture.  His insight into the regions and States of India is fascinating.  In fact, this is an excellent book which presents a comprehensive picture of India.  It is a great honor to release his book ‘India Unveiled’ at the Consulate General of India, Atlanta.” 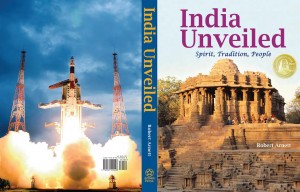 The highlight of the evening was a presentation with slides and commentary on his travels throughout India by Robert Arnett, the author, photographer, and publisher of the beautiful book. Arnett and Smita Turakhia, the editor, book designer, and contributing photographer, then presented a copy of “India Unveiled: Spirit, Tradition, People” to Ambassador Kumar, followed by a book signing for the invited guests. The evening ended with an Indian dinner.

Among the many prominent invited guests was Dr. Jagdish Sheth, the internationally renowned Professor of Marketing at Emory University who has donated over a thousand copies of previous editions of India Unveiled to schools in Georgia and across the country. When asked about his patronage, Sheth replied, “Being involved for many years with the Indian American Education Foundation-Atman Press School Library Project has been extremely gratifying to us. Mrs. Sheth and I consider it a privilege to share India’s rich culture with students through India Unveiled and Finders Keepers?. The Sheth Family Foundation has received hundreds of letters from schools telling us how the books are so informative and enlightening and just the sort of reference students today need.”

Arnett’s journey to India was not that of a casual traveler. Having a graduate degree in history and being a collector of oriental, African and primitive art, he chose places with cultural significance, or found significance in them in the light of his scholarly background and artistic and philosophical interests. He brought back not only his understanding of an ancient civilization…but also a pictorial and narrative record of his travels.

Many of the new images were captured during a recent trip to India. In addition, the text has been strengthened considerably. With an eye toward furthering understanding and neutralizing prejudice toward differences in our society today, this updated version acknowledges India’s modernity while giving full credence and more explanation of Hinduism, Jainism, Buddhism, and Sikhism, the four religions that originated in India. The book addresses topics such as the mother aspect of God, the symbolism of murti, the symbolism of Aum, why Hindus respect cows, and the caste system.

The book includes a timeline of India and the world, which is more in line with archeological discoveries and India’s ancient texts and history, rather than based on colonial influenced, dated ideas about the history of the country. The text in India Unveiled is punctuated by quotes of notable people including Einstein, Rudyard Kipling, Mark Twain, Marco Polo and others. The book has an excellent glossary that is extremely useful for first-time readers of India and is especially helpful for younger generations that grew up outside of India. “India Unveiled: Spirit, Tradition, People” will be the centerpiece of discussions in many homes where there is curiosity about India and a respect for her tradition.

For more information on India Unveiled: Spirit, Tradition, People (ISBN: 978-0965290098) visit www.AtmanPress.com. Books can be purchased from Amazon.com or autographed copies can be ordered directly from Atman Press.