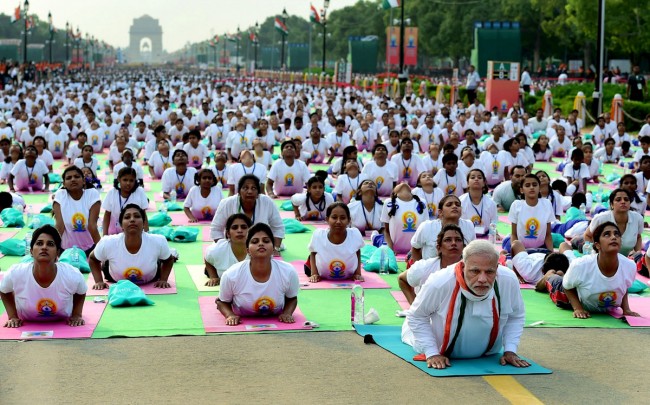 Atlanta, GA:  The 2015 ‘Light of Yoga’ Award is being bestowed on to those who made pioneering contributions toward the inaugural International Day of Yoga and who continue to be beacons of light for its spiritual and health benefits rooted in ancient traditions:   Indian Prime Minister Narendra Modi and his personal yoga teacher Dr. HR Nagendra Rao; His Holiness Sri Sri Ravi Shankar; and His Holiness Swami Dayananda Saraswati, Convener of the Hindu Dharma Acharya Sabha, which first time in history puts many Hindu organizations and institutions under one umbrella.

They are to be honored at a mega gathering of Hindus during the Global Dharma Conference.  The Hindu Students Council, which is the largest Hindu youth organization in North America, was co-founded in Atlanta.  It is organizing a three-day 25th anniversary celebration and observance which is expected to have an estimated three-thousand attendees during the weekend of September 11-13, 2015 in Edison, New Jersey. www.dharmaconference.com

“Yoga is the Kohinoor diamond of our ancient Hindu heritage and the sages discovered and developed it to benefit the entire humankind”, remarked Nikunj Trivedi, the Chairman of HSC. “Therefore, it is apt thatIndia, which has always been the land of yogis and spiritual giants takes this initiative and connects the world through a system of harmony.”

The birds’ eye images of people in yoga positions at the world’s most well-known landmarks on World Yoga Day were breathtaking.  Indian Prime Minister Modi’s own procession to mark the extraordinary event with thousands of agile school children was deeply inspiring. The Indian government is making strides in bringing fresh life to the idea that yoga can help restore national pride and a return to ancient values in an age of tarnished virtue and health crises.

In response to boycotts and criticisms of International Yoga Day as spreading “religion” and Hindu values on a secular world, Trivedi said the concept of “religion” is a western and colonial construct imposed upon India and even the word “Hindu,” which we have come to accept as our identity, is an Arabic/Western construct.  The Ashtanga Yoga philosophy and its wisdom, which is the most popular source of today’s yoga movement, is nothing but a product of one of six schools of Hindu philosophy.

“Just because yoga is a gift that we have shared with the world doesn’t mean: a) It is not Hindu. b) People will automatically become Hindu.  It is about time that we Hindus ask for our rightful place in the world. This is one of the main reasons for the yoga topics in the Global Dharma Conference.”

The Global Dharma Conference aims to create a unique gathering of spiritual, political and business leaders as well as scientists and experts to explore and discuss the applications of “Dharma” and principles of harmony in various walks of life.