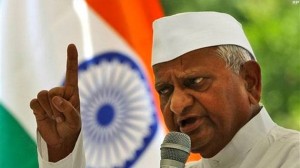 The 33rd annual India Day parade down Madison Avenue Sunday featured 40 colorful floats, marching bands and convertibles and thousands of cheering revellers marching to the beat of dhols or the Indian drums.

Another highlight of the parade was a replica of the Red Fort in an 80 by 10 feet area in Manhattan near the parade route to showcase India’s heritage.

Many parade-goers along the orange, white and green lined route wore “I am Anna” paper hats to signify their support to Hazare, whose anti-corruption crusade has inspired thousands at home and abroad.

One parade-goer wore a multi-coloured turban with three miniature Indian flags stuck in it. He waved an American flag and marched with three dozen members of the Vaishnav Temple of New York in New Hyde Park.

The parade drew elected officials and political candidates, including Reshma Saujani, a Democratic candidate for public advocate and Joe Lhota, a Republican mayoral candidate ahead of the Sep 10 primary.

“I think our voice is getting more politically powerful,” said Saujani, who would be New York city’s first Indian-American politician, if elected. “It’s important for the community to be out recognizing that.”

“New York City’s diversity is one of its greatest strengths,” said Lhota.

Hazare will be ringing the opening bell at the Nasdaq stock exchange Monday morning yo mark india’s Independence Day with many IT companies listed on Nasdaq.