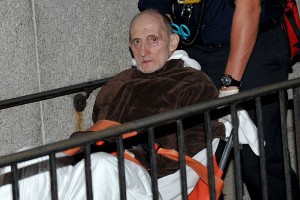 New York, July 10 (IANS) An elderly man in the US has been sentenced to 17 years in jail for bludgeoning his roommate to death with the metal footrest of a wheelchair last year, media reported.

The State Supreme Court in Queens in the state of New York sentenced Thomas Yarnavick, 67, Wednesday for killing Jailall Singh, 71, in 2013 during a squabble over a trivial issue, the New York Times reported.

Yarnavick, who was initially charged with murder, pleaded guilty to first-degree manslaughter in May.

An argument erupted between them Oct 30 over whether to close the off-white sectional curtain that divided their quarters.

Officials said Yarnavick, a frail man in a wheelchair who had shown no prior signs of violence, removed the footrest from another wheelchair and used it to repeatedly beat Singh on the head.

Yarnavick then disposed off the bloody footrest in a laundry hamper, where it was discovered by the police. Singh died within hours of the attack.

“This was a particularly senseless and disturbing killing of a man living out his days at a nursing facility,” Richard A. Brown, the Queens district attorney, was quoted as saying Wednesday.

Yarnavick, who had been held without bail since his arrest and arraignment in November, pleaded guilty to manslaughter charges in May, the report said.

It remained unclear what led the dispute into violence at a time when most residents of the home would have been asleep. Shortly before the attack, nursing home staff members made a routine check on the room and found nothing awry.

The killing shocked the staff and residents at the 120-bed nursing home, the report said.