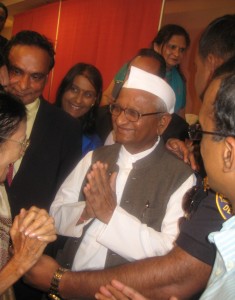 Atlanta, GA: Anna Hazare is confident of mobilizing six crore (60 million) people in his fight against corruption in the months to come. “I will be back at Ramlila Maidan. People will say, bring the Jan Lokpal bill or go home. I will not die until the Jan Lokpal bill comes into effect,” he said. The anti-corruption crusader was speaking at a community luncheon at the Impact Conference Center in Global Mall on Sunday, August 25 during his whirlwind, one-day visit to Atlanta. The luncheon was organized by India American Cultural Association (IACA) and C.K. Patel and sponsored by Shiv Aggarwal, Braham Aggarwal, Nitin Shah, Ved Bhatia, JDH developers, Dr Sreeni Gangasani, Dr Paddy Sharma and supported by Gujarati Samaj and Shree Shakti Mandir.

Hazare is on a two-week US trip to drum up the support of the global youth. Earlier in the week, at a Congressional reception hosted in his honor at the Capitol Hill in Washington DC, Hazare had indicated that he would go back to agitation at Ramlila Maidan on the first day of the winter session of the Parliament, if the Union Government does not bring the Lokpal in the current session.

At the luncheon, Hazare spoke briefly about resuming phase two of his road tour across several states on his return to India, beginning with Bihar, to “awaken people”.  In the first phase of the trip, Hazare and his entourage of six cars, one bus (fitted with a crane) and 22 volunteers had crossed 2800 kilometers by road in four months, energizing people at the grass roots.

Hazare said it was not money that he sought from Indian Americans. “I need your heart and technical guidance so that we can tell the world about our movement,” he said.

The anti-corruption crusader, who called himself a fakir who lives in a temple and has no money or belongings, spoke at length about his life and mission. He said, when he was 26, he was faced with a profound question about the purpose of life. “People don’t come with anything or leave with anything, yet they run all their lives.” He (saw no meaning in that kind of life and) even contemplated suicide. But he happened to see a book by Swami Vivekananda at a book stall at a Delhi railway station, and that changed his life forever. That chance reading gave him new purpose in life, and he decided to dedicate his life to the service of man, society and country.

“I learned that every life is meant for service,” he said. “In service lies true happiness that stems from the inside.”

He spoke about his work in his village Ralegan Siddhi, a village where 80% of the people were hungry because of constant droughts. Today, soil and water conservation projects ensure enough water for two crops every year, he said.

Realizing that development and fighting corruption are but two sides of the same coin, Hazare launched an anti-corruption movement in Maharashtra in 1991, which sent six cabinet ministers and 400 corrupt officials home.

In 2002, Hazare led a nine-year movement in Maharashtra state which forced the state government to enact a revised Maharashtra Right to Information (RTI) Act. In 2005, the RTI Act was enacted by the Government of India and signed by the President of India.

“Thanks to RTI, several ghotalas (scams) like the Adarsh Society scam, the 2G scam, the helicopter deal have come out,” he said.

In 2011, Hazare came into national and international limelight when he initiated a satyagraha movement for passing a stronger anti-corruption Lokpal bill in the Indian Parliament.

The luncheon program began with Hazare and a group of visiting swamijis from Surat lighting the ceremonial lamp for Lord Ganesha, amidst the singing of the shloka ‘Vakratunda Mahakaya’.

Earlier, Shiv Aggarwal, owner of Global Mall and one of the organizers of the luncheon said it was a proud, historic moment for the Atlanta community to have Anna Hazare in its midst. “Annaji has captured the hearts and minds of people,” he said, adding that his visit was all the more special as it happened during the centennial celebrations of Swami Vivekananda. “Swami Vivekananda had said, ‘Arise, awake, stop not until your goal is achieved’. We are with Anna until we reach our goal,” he said.

Nitin Shah, president-elect of GOPIO (Global Organization Of People Of Indian Origin), provided a brief introduction of Hazare. “This is a once in a lifetime opportunity to meet a man who comes once in 100 years,” he said, amid cheers from the audience. “What Gandhi was for the 20th century, Anna is in the making for the 21st century,” he added.

Hazare also spoke at the second day of the annual Festival of India organized by IACA at Gwinnett Center and visited the Gandhi statue at the Martin Luther King Center in downtown Atlanta.