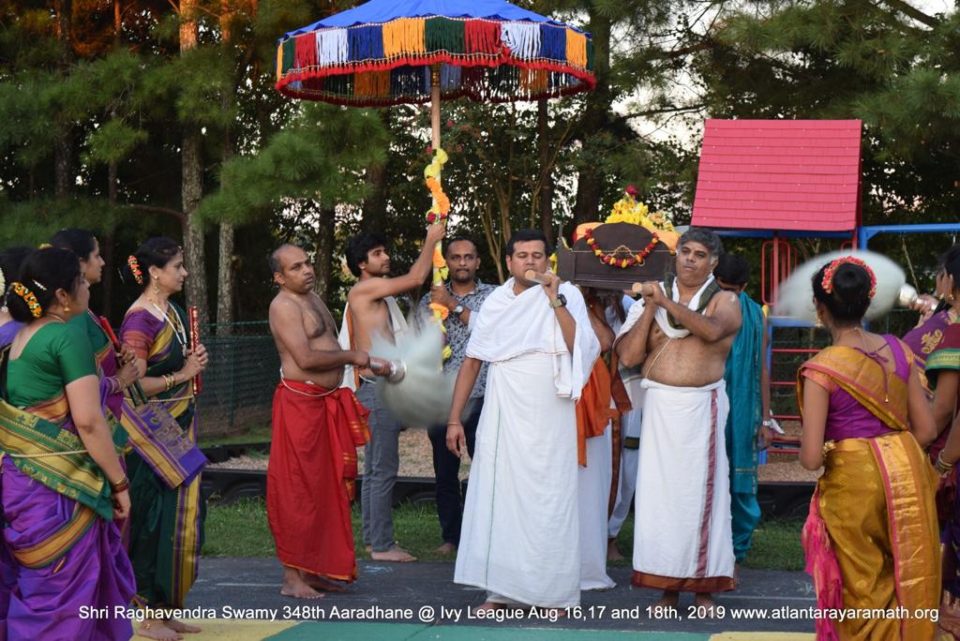 A prominent guru of the lineage of Madhwacharya, Shri Raghavendra Swamy, a 16th century saint is believed to have entered Jeeva Samadhi at Mantralayam and live in a metaphysical form for 700 years. Each year, the day he entered the samadhi is observed as the Aradhane. Celebrated on the Shukla paksha in the month of Shravana, Aaradhane is a three-day celebration known as Purva, Madhya and Uttara Aaradhane.

“By the blessings of Guru Rayaru, aaradhana mahotsava was celebrated on all the three days. We are immensely happy to witness devotees gathering from Atlanta, Florida, North Carolina and South Carolina. Devotees and volunteers helped in preparing prasada for all attendees, in setting up the tent and in making the festivities divine. On behalf of RAMA, I pray Sri Hari Vayu and Guru Rayaru to bless everyone for making the celebrations memorable,” said Pradeep Vittalamurthy.

The cultural segment included several devotional song and dance performances. A traditionally bedecked Pallakki or Palanquin procession brought the Lord into the place of worship while a striking bejeweled Unjal (swing) awaited him. The evening Aarti and prasada distribution ended each evening on a high note. Devotees received mantrakshate and chandana(srigandha) from Mantralaya and devoured the prasada served on a plantain leaf with traditional food cooked by devotees at their homes.

Concert by Anjana Nagaraja accompanied by LaxmiNarayanan on Violin, Santosh Chandru on Mridangam, Anant Rajan on Ghatam, Flute by B.S. Suresh, devotional songs by Pragna Srinivasa, and Kolaata by Shruthi Vinay and team were part of the celebration on the 17th of August.  The cultural segment for the 18th of August included devotional songs by Ratnamanjusha and her students, Magathi & Taarini Ganesh, Chaitra Gururaj and Amrutha Kowlagi and a short play by kids on miracles of Sri Raghavendra.

You may check https://atlantarayaramath.org/ for details./