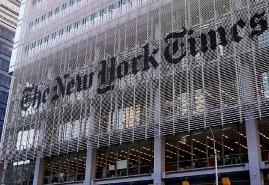 As of Friday, eight confirmed cases of Ebola have been or are being treated in the US, and one US citizen died abroad, having never returned to the country, according to CNN. Dozens of others are being monitored or are in some form of quarantine, it said.

However, citing Peter Piot, the British microbiologist who first identified the Ebola virus, it painted the “nightmare scenario” of an Ebola pandemic unleashed by an infected person travelling from West Africa to India and getting substandard treatment there.

“However, India’s most troubling threat is not abroad, but at home: the crippled public health system,” the Times suggested in an editorial noting it “spends less than 1 percent of its gross domestic product on public health care.”

“The Indian government has already shown itself incapable of dealing with lethal viral diseases,” it said even as it acknowledged that India “has set up screenings for Ebola at international airports” and “so far, no cases have been found in India.”.

“But with the World Health Organization warning that Ebola infection rates could rise to 10,000 new victims a week by the end of the year in West Africa, and the fumbles dealing with Ebola in Spain and America, improving India’s public health system is a national emergency,” it said.

He is charged with ensuring that “efforts to protect the American people by detecting, isolating and treating Ebola patients in this country are properly integrated but don’t distract from the aggressive commitment to stopping Ebola at the source in West Africa.”

Obama had been under pressure from Republicans for weeks to name an “Ebola czar” but Klain’s appointment did not satisfy his conservative critics.

“This is a public health crisis, and the answer isn’t another White House political operative,” said Republican senator Ted Cruz.

“Klain is not known for his health-care expertise, though he would get briefings on those policies in his capacity as a campaign strategist for Gore and the Democrats’ 2004 presidential candidate, John F. Kerry,” the Washington Post noted.