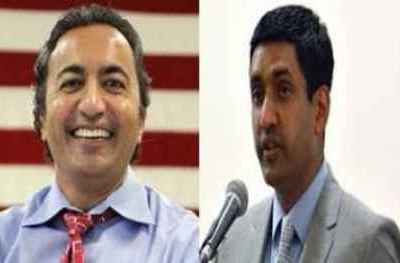 Washington, Nov 6 (IANS) As the dust settled down on the US election giving Republicans full control of the US Congress, two trailing Indian-American candidates, Ami Bera and Ro Khanna, both Democrats, were still unwilling to concede defeat.

In the battle for the Silicon Valley, incumbent Democrat Ami Bera, only the third Indian-American in the House after Dalip Singh Saund and Bobby Jindal, was trailing 48.6 percent to 51.4 percent to Republican businessman Doug Ose.

But Bera expressed confidence that he would erase Ose’s 3,011-vote lead, noting that he won two years ago after being virtually tied with Republican Representative Dan Lungren on election day.

“We still have thousands of votes left to count, but I feel very good about where we are today,” Bera was quoted as saying in a statement Wednesday by San Francisco Gate.

A statement from the Ose campaign also stopped short of declaring victory, noting that there still are about 60,000 uncounted ballots in the district.

In the Democrats-only tussle for a South Bay congressional seat too, Rohit ‘Ro’ Khanna, a former Obama administration official, who has challenged seven-term Democratic Representative Mike Honda of San Jose, refused to concede.

The challenger, who finished election night 3,549 votes behind Honda said a huge number of vote-by-mail ballots dropped off at the polls Tuesday remain untallied.

With an estimated 40,000 votes still outstanding in the Silicon Valley district, the race is far from over, Khanna was quoted as saying.

“When we started this campaign nearly two years ago, I was polling at just 3 percent. Now, they’re still counting the ballots. It’s that close.”

Khanna said in an e-mail message to supporters Wednesday.

But Honda and his backers are confident his current 52 percent to 48 percent margin will hold up, the San Francisco Gate said.

In a statement, Vivek Kembaiyun, a spokesman for Honda, noted that the seven-term congressman led both among votes cast at the polls and in the vote-by-mail ballots already counted.

“With the information available, it appears that the voters have made their decision,” Kembaiyun said.