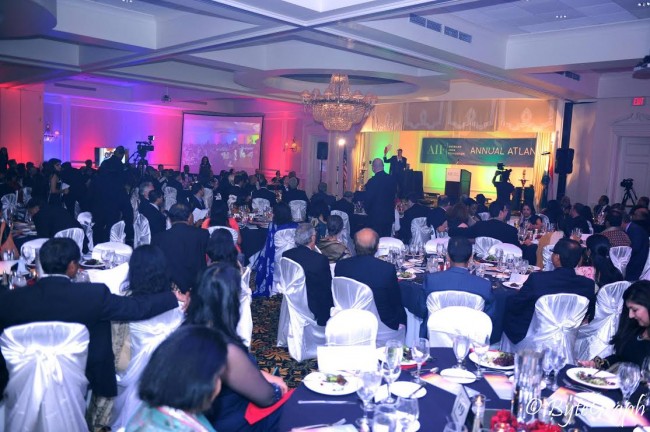 Atlanta, GA: The Atlanta chapter of American India Foundation (AIF) raised around $297,000 at its second annual gala held on April 2 at the Atlanta Athletic Club. $75,000 was raised during the pledge drive conducted by George Franco of Fox 5. The gala featured around 240 guests, including some of the most influential philanthropists, entrepreneurs, luminaries and community leaders. Three eminent global business leaders, David Abney, Chairman and CEO, UPS; Patrick Decker, President and CEO, Xylem; and N.K. Chaudhary, Founder, Chairman and MD, Jaipur Rugs were honored at the event.

The funds raised will support the organization’s Learning and Migration Program (LAMP), which helps children of people who migrate from their villages in remote rural areas in search of labor. The initiative provides children with resources to attend local schools, stable home and educational environments, as well as safe and structured care in seasonal residential hostels during the migration season.

The evening started with the traditional lighting of the lamp by Swati Shekhar, one of the beneficiaries of AIF’s Youth Leadership programs who introduced AIF’s Founding Chair of the Atlanta Leadership Council, Amitabh Sharma. Quoting the principles of sanathana dharma, Sharma said, “We are all born to do good to others and AIF facilitates the process of giving back through its innovative programs”. A video presentation featuring various achievements and progress made by AIF since its inception in 2001 showed AIF has impacted over 3.2 million lives, raised over 100 million dollars, cultivated 248 NGO partnerships and reached 23 states in India with 11 chapters in US. Dr. Sharma welcomed the guests and introduced Victor Menezes for his opening remarks.

Sharma recalled the origins of the organization when PM Vajpayee called upon President Clinton to undertake such an initiative. “History repeats in cycles” he said “15 years later we have another BJP leader and if you believe the odds, we may have a Clinton in the white house again”. He stated that AIF aims to touch the lives of 5 million people by 2018. He urged the audience to get involved, saying that the organization is still young. He also welcomed the new CEO of AIF, Alex Counts. He acknowledged everyone that worked towards AIF and the gala.

“Giving creates a ripple effect. The external one that’s measurable, quantifiable what we call as impact and the one that happens within us.” said Nipun Mehta. “I believe that the people who really change the world are the ones that lead with inner transformation”.

Citing Gandhi as an example, Meha said, “When we give, by leading with change, we reconnect with our roots in a very deep, profound, meaningful way. And when we leave with heart in such a way, that gift which is born out of selflessness, the shape or the size does not matter. It could be the quietest hug you’ve given, the quietest blessing you’ve given, it could be the smile, but it ends up changing you.” he concluded.

Nipun Mehta has received many awards, including the Jefferson Award for Public Service, Wavy Gravy’s Humanitarian award, and Dalai Lama’s Unsung Hero of Compassion. In 2015, President Barack Obama appointed him to a council on poverty and inequality.

“It’s a pleasure to be here” said Ambassador Shapiro who introduced David Abney, who could not be at the venue. He talked about his humble beginnings and journey to success. Ed Martinez, President of UPS Foundation and Chief Diversity Officer received the award on his behalf. Ed expressed his grief over Kolkata flyover tragedy in India adding that UPS that operates all over the world is affected by it. “UPS has operated in India for almost 30 years and very much part of our future. David Abney is honored by this award and shares this with 435, 000 UPS employees worldwide who work everyday with a goal of community service” he said.

“I always think I could be the man that could move markets and that’s who Dennis Lockhart is, but is also a great citizen of Atlanta and the world” Jeff Rosensweig said in his introduction to Dennis Lockhart.

“I’ve been thinking about long term prospects of growth for the United States. There are two fundamental problems.” Dennis Lockhart said. Growth and productivity being slow and Demographics, he identified were the two issues. He acknowledged the contribution to technology from Indian Americans and hoped that the community will solve that problem. The second problem he said was Demographics. By 2030 he said the number of Americans over the age of 65 would be doubled. “One of the solutions for the United States is to have a smart immigration policy, especially in light of its aging population. These two problems have a lot to do with how this country is going to evolve over the years economically” He added. He said while the Indian American community had contributed a lot the United States, the Indian Diaspora through organizations such as AIF had also given back to the country of origin.

“I leave here with a better hope for our future. Patrick knows the world from a global perspective.” Phil Bolton said as he Introduced Patrick Decker.

“We are honored and humbled by this recognition from the AIF. I’m very inspired by what I see here and instead of dwelling only on the challenges inIndia, tonight is a true celebration of what is possible. It’s a testament to the good we can foster.” said Patrick Decker. “We understand the complexity and urgency ofIndia’s unique water challenges and we are committed to working with the government and our customers to develop sustainable solutions that will help fuel the growth ofIndia’s economy. At the same time, we have a responsibility to help expand access to vital clean water resources. That’s why we created Xylem Watermark, our corporate citizenship program, to help bring water and sanitation access and education to communities in need inIndiaand around the world.”

“Mr. Chaudhary is the father of modern social entrepreneurship” Jagdish N Sheth said in his introduction of Nand Kishore Chaudhary.

In his remarks, Chaudhary said, “AIF and I have a lot in common. We both work from the heart and aim to create sustainable change in the lives of people, regardless of their class, caste, religion. I have the great privilege to receive this award on behalf of 40,000 artisans at Jaipur Rugs. It is wonderful to see AIF working at grassroots inIndia. I’m proud that Jaipur Rugs and AIF will be working together to improve the lives of thousands of our artisans.”

“I realized that some of the most beautiful rugs were made by people who did not have the most basic rights,” Chaudhary added. This, he said, inspired him to start Jaipur Rugs with two looms and nine artisans. Today Jaipur Rugs supports a network of 40,000 artisans across 600 villages inIndia. The rugs are exported to more than 40 countries across the world.

The event had a unique entertainment segment of Rajasthani folklore dance presented by seven dancers, only one of who was of Indian origin. It was a true representation of bridge building and multicultural ethos at play.