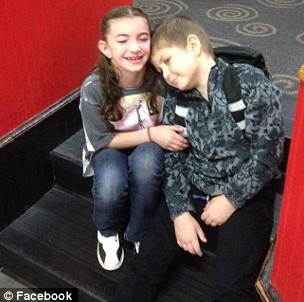 New York, Nov 20 (IANS) How would you react if you realized that your eight-year-old son is dating a girl?

There is a US couple who is celebrating the love between their son and a seven-year-old girl for a touching reason: their son is suffering from last-stage cancer.

The parents are happy that David Spisak, who was diagnosed with cancer when he was just two years old, is dating Ayla. They had to allow him this one last, beautiful thing in his life, www.littlethings.com reported.

“She kinda looks like Snow White. Actually, she is kinda like the real Snow White because she is so kind to everybody, especially me because she loves me,” David was quoted as saying.

When the Virginia-based parents came to know about David’s love, his mother Amber called on Ayla’s mother Angela.

The two mothers agreed that this was something very special.

“Their story is definitely something everyone can learn from,” Angela said.

“Just to love at the end of every day that’s what’s important. Who loves you and who you love back,” she was quoted as saying.

Even after two transplants, David’s cancer has been persistent.

Now, David’s parents have decided to stop the treatment and allow him to live a normal life – a shorter but a more enjoyable one with the love of his life.

Covid-19 vaccine will be ‘reality’ by year-end: Fauci

Health, set, goal: Add these 5 superfoods to your diet now