Atlanta, GA: Shanthala Damle returned to Bangalore to fulfill a dream and act out her conviction by entering into politics as a candidate for the Loksatta Party from the Basavanagudi constituency. Damle’s message for clean and ethical politics reaches out to middle class educated voters.

She is clear: The victory of the Loksatta Party will bring in more eligible candidates.

India has witnessed organized and spontaneous groups asserting their democratic rights by coming together during crisis. The message is clear. The time is ripe for citizens to take control of their political destiny and demand what is rightfully theirs. The need of the hour is committed and transparent party politics that does not ride piggy back on lineage and corruption. Over to the interview. What was the decisive factor that prompted you to return to India and participate in active politics?
I have always been pained by the increasing corruption in India – among our politicians and within the government. Even after 65 years of independence, we call ourselves a developing country. Nearly 40% of our population lives below the poverty line despite sufficient resources and opportunities available to tackle our problems that can put our country on the track of inclusive development. Apart from poverty, this political corruption breeds all kinds of other problems –law and order issues, terrorism, lack of economic growth and increasing economic and social divide. Today, every area that we lag in has been the direct or indirect result of political corruption.

Transparency and accountability, which are the pillars of good governance, are almost non-existent today. The common citizen has to depend on political connections or bribes to get his/her work done. India lacks a strong legal or judicial system to keep the political system in check. Vested interests in the political class have not endeavored to strengthen these systems just so they can keep their fiefdoms intact.

The only way to solve our country’s problems is to clean up our political system first.  This cannot happen unless people with a clean background start to participate in the political process. But blatant corruption has brought about alienation of the people from politics. Politics has become taboo.

In this context, I have been thinking about citizen participation in transforming politics in India. I want to see my homeland as a developed nation soon. While introspecting, I began to ask myself – If not I, then who? If not now, then when?

Meanwhile, I had an opportunity to take ‘voluntary retirement’ from a career in IT after working in the US for about 12 years. I returned to India in 2010 and gained experience with two elections – helped a “clean” candidate, Ms.Nisha Singh, win election as a corporator in Gurgoan and helped a highly qualified MLC candidate get 16% of the vote share in Bangalore. There also has been a wave of anti-corruption campaigns over the last two years of which I actively participated. All these experiences have further strengthened my resolve to engage in active politics in India. 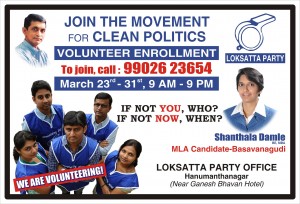 You have had experience working in the political set up in the US. How has this shaped or helped you in your work and campaign in India.
I learnt several valuable lessons from Krystal Ball’s election campaign. Some of the interesting features were the relative transparency in election campaigns, the regard for opponents and fair fights in elections. Contestants also give importance to the background of opponents ensuring that a clean background is maintained by most candidates. The emphasis on public debates about issues is also a great way to create awareness among people about issues and candidates.

Like in most mature democracies, in the US, elections are usually fought on the basis of issues. For example, those who care about the environment organize themselves, collect donations and volunteer for, and support a candidate, who espouses policies to preserve environment. Those who care deeply about healthcare, support a candidate whose vision matches with theirs and so on.

In India, I have been fortunate to find myself in the midst of strong leaders in the Loksatta Party that share my views on clean politics, transparency and accountability. My campaign has been transparent right from the very outset. I have made all activities, donations and expenses public through my website www.shanthaladamle.com.

Most politicians in India have been making a mockery of election laws – but my campaign is different. My campaign does NOT need crores of rupees because I won’t be buying votes with liquor and sarees or by paying rowdies! Yet, the campaign needs money for legitimate expenses  for spreading awareness about our Clean Politics campaign through pamphlets, banners, events and for maintaining an office and a small campaign staff. I am trying to raise Rs.16 Lakhs (stipulated spending limit for the election I am contesting) by donations from people who are supporting this movement for Clean Politics.

People are invited to visit our office and call me to understand our campaign better. We have been receiving thousands of calls from people of the constituency. Our volunteers have been provided orientation to carry forth the message of Clean Politics. While providing orientation, a new set of leaders with good values are being developed from among our volunteers.

To make up for the lack of a public debate system, I have been speaking on various topics ailing urban India at several engagements, communicating my views through interviews, social media and a blog. More importantly, I am speaking out against corruption in public life and raising awareness about Clean Politics. So far as my campaign goes, it is issue-based, because corruption bothers both me and Basavanagudi constituents.

Would you address women specific issues, considering that issues such as security and laws to enforce such measures are need of the hour.
One of the highlights of my manifesto is solving women specific issues effectively. Appointing women police officers in every police station and ensuring justice quickly are top priority. I will also implement measures for crime-free streets through better street lights and better policing. I am also passionate about providing financial independence for women, and in that direction, I have planned to provided vocational training courses within the constituency.

As a woman contestant, I am also hoping that my win will provide much needed encouragement to women constituents to move out of their (often self-imposed) boundaries and participate in public decision making. In my speaking engagements, I am calling upon women to break barriers and become more empowered by using available tools and resources. We will have to work with women’s groups, self-help groups and other resource groups to bring a transformation in women’s attitudes about themselves. As an elected representative, I will commit to providing women as many opportunities as possible to reach their full potential in any area they choose to be in.

What role do you see NRIs playing now that they too have right to cast a vote.
Although NRIs can now vote, very few NRIs have registered to vote. This is partly due to logistical issues in enrolling as a voter. Also, electors can only vote if they are physically present at the polling location on the day of polling. Since dates for most Indian elections are only decided just about 4-5 weeks earlier, many NRIs may not be able to make trips specifically to cast their votes.

In any case, voting is only a small and passive way to play a role in democracy. There are more active ways NRIs can help to foster a culture of clean politics in India. They can contribute funds to the causes and the candidates they believe in, help mobilise other NRIs around the causes, offer to volunteer for various tasks that can be done remotely, offer to research on issues and solutions, and so on.

There are many NRIs who are connected with my campaign and are supporting me on the social media. There are several occasions where the parents of NRIs in the constituency I am contesting had heard about me first through their sons or daughters. Also, the concept of seeking donations for election campaigns is fairly new in India. Because this concept is more widespread abroad, I encourage NRIs to contribute generously to our campaign. NRI contributions will go a long way in creating a movement for ethical politics.

I invite NRI supporters of ethical politics to also register on http://peopleforloksatta.org/ and get updates about the progress of Loksatta in Ethical Politics. As a final word to those NRIs who are interested in returning to India, please consider politics as an opportunity to serve India. Please join politics and contest elections if you believe that transparency, good governance and Clean Politics are the way forward for India.

As an RNRI, what have been some of your greatest challenges? How have you dealt with these?
Although I lived in the US for 12 years, I have been in touch with the realities of India – the toll of corruption and the lack of good governance on the common man. Nevertheless, understanding the ground realities of Indian politics, the Indian context of governance, to start from scratch in an unfamiliar environment has been an interesting experience.

I have completely involved myself in the fight for good governance. I participated during Anna Hazare’s India Against Corruption Movement and led some of the protests against the failing solid waste management system in Bengaluru. During these movements, I have been exposed to the blatant corruption in civic bodies that one may not find in the US. It has provided me an opportunity to look within the system and also search for answers to these problems.

One of my recent problem-solving experiences was during my campaign. We had to conduct an extensive voter registration drive during October and November to raise awareness about recent mass illegal deletions from the voter lists of Bangalore – nearly 80,000 deletions (out of 230,000 – about 34%) were found in Basavanagudi constituency alone! This mismanagement of voters’ list deprives citizens of the only mechanism they have to punish non-performing representatives and to choose good leaders. It provides a bigger challenge to honest politicians like me but we have been able to convert that challenge to goodwill by organizing the registration drive.

Corruption and the deeply divisive nature of politics usually results in the election of an unqualified representative. This has led to apathy and a lack of involvement of the general public in politics. We are trying to ensure that voter participation is high this time around. We are also running an extensive campaign so that voters know that they have an alternative to corrupt politicians this time. Interestingly, almost a hundred people, who were previously not even interested in voting, are volunteering for my campaign. They are now spending significant amount of time every week to help me reach out to thousands of voters and spread the word for Clean Politics.

GIACC and Isha Institute of Inner-sciences invite you to A special evening of Music, Meditation and Wisdom