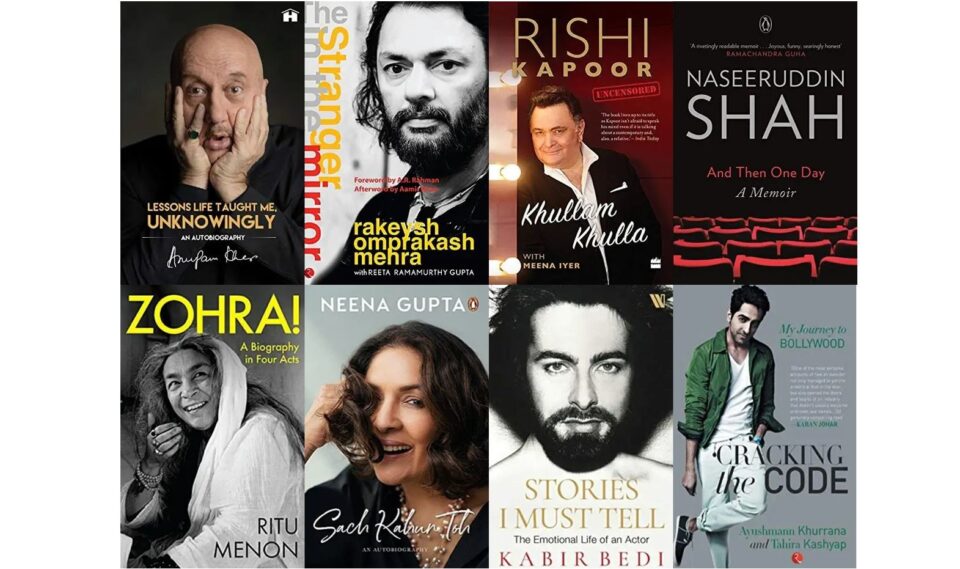 Life is no bed of roses for those who attain fame and respect around the world. The shining success of stardom is barely the tip of the iceberg, what goes behind it is another world all together. Bollywood actors and directors’ roller coaster journey to fame makes for an interesting read for their fans and the public in general.

IANS shares a list of eight Bollywood biographies that gave insights into the fascinating journey of these extraordinary personalities.

Zohra! A Biography in Four Acts
In this biography of the unlikely star, Zohra Sehgal, author Ritu Menon shared a compelling account of Zohra’s life and work that situates her as a pathbreaking figure in the history of Indian dance, theatre, TV, and cinema. At the age of eighty, Bollywood discovered her, and she went on to become a household name as the most charming and unconventional grandmother. The author takes the readers through her remarkable journey from her birth in 1912 into a family with connections to the nawabs of Rampur, Zohra Mumtazullah Khan to an adventurous streak from the age of eighteen to travel to Germany to learn dance. From setting up a dance school in Lahore with her husband Kameshwar Sehgal, eight years her junior to travelling across India for fourteen years doing plays during the partition period. The book traces the actor’s relentless journey of defying conventions.

Sach Kahun Toh: Meri Aatmakatha
Veteran actress Neena Gupta has made many shocking revelations in her autobiography. The actress has candidly penned down about her personal life, the birth of her daughter Masaba and also addressed professional issues such as the casting couch, film industry politics etc. She is honest about her life choices and the consequences she faced. She cited her life’s incidents like; when Satish Kaushik offered to marry her when she was a single mother pregnant with Masaba and she had no money for her C-section delivery. Her initial denial to the “Choli ke peeche” song, being typecast as a “lallu ladki” and never offered a heroine’s role. The actor’s candid memoir includes anecdotes about her major films and insights into her relationships.

Stories I Must Tell: Emotional Life of an Actor
Kabir Bedi goes out and shares shocking revelations of his emotional roller-coaster life in his autobiography. The book was written and released during the pandemic. He revisited all hidden corners of his life, reflecting on his mistakes and his vulnerable side. The actor has been painfully honest about his life, sharing his sexual relationships, his struggles in Hollywood, his three divorces, the untimely demise of his son and much more. The detailed account of the suicide of Bedi’s schizophrenic son Siddharth, reveals the emotional side of him. It features sketches of Bedi’s parents – his English mother Freda who became an influential Buddhist nun known as Gelongma Karma Kechog Palmo and his father Baba who became a philosopher in Italy. The actor revisits the closed chapters of life, unleashing his many shades in the memoir.

Cracking The Code: My Journey In Bollywood
Ayushmann Khurrana’s autobiography co-written by wife Tahira Kashyap released in 2015, received a lot of criticism as an early take on the actor’s career. He was compelled to write about his struggles as an actor after giving three consecutive flops. The actor had decided to go back to Chandigarh, and during that time, he penned down his journey. As nothing was working for him, the actor stated in the book he had decided that if not for films he would work on his music band Ayushmann Bhava, he would sing on birthdays. One of the excerpts in the book went viral later, of trying to get an audition with Karan Johar in 2007 and failing to get through. “We only work with stars,” he was allegedly told by Karan Johar’s office. The book is supported by anecdotes from his own life, his transition from a reality TV star to a distinctive voice on radio from getting a break in serials to becoming the highest paid host of reality shows on TV, from dealing with failed auditions to finally landing the coveted lead role in “Vicky Donor” and struggling to juggle his new-found success with his family life.

And Then One Day: A Memoir
Naseeruddin Shah’s autobiography chronicles his journey from childhood to the beginning of his career in Bollywood. It also throws light on his marriage with Ratna Pathak Shah and includes his memories from the time he spent at Aligarh Muslim University, National School of Drama, Delhi and Film and Television Institute at Pune. During the course of the book, Shah expresses his admiration for many people like Ebrahim Alkazi for his immense talent. He also mentions about his first marriage and how it failed. Shah refers how his disappointed father moved him to the Aligarh Muslim University.

The Stranger In The Mirror
Film director Rakeysh Om Prakash Mehra has recently forayed into the literary world with his debut book co-written by Reeta Ramamurthy Gupta. The book’s foreword has been given by A.R. Rahman. Aamir Khan has given the afterword. It features first person accounts of some prolific names of Indian cinema and the advertising world — Waheeda Rehman, Manoj Bajpayee, Abhishek Bachchan, and many more. He narrates some interesting stories like at one place he points out that for the movie “Aksa” he asked Amitabh Bachchan to keep a French beard and he just stuck with the style. The book traverses the readers through his life’s learning and struggles.

Lessons Life Taught Me, Unknowingly: An Autobiography
Anupam Kher’s autobiography narrates his entire journey starting from his early days in Kashmir to his days in Chandigarh for learning theatre and then Delhi before starting his career in Bollywood. He sheds light on how he managed to overcome the difficult stages of his life from not getting roles or getting diagnosed with depression and going bankrupt. Despite all this he stresses on the relevance of being an optimist and the life lessons he learned from his father.

Khullam Khulla: Rishi Kapoor Uncensored
Rishi Kapoor’s autobiography co-written by Meeny Iyer narrates his illustrious journey in Indian cinema. There are certain interesting parts from his book that reveal his honest thoughts. For instance Rishi Kapoor at one place mentions that his wife Neetu Kapoor deserves a gold medal as she patiently handled his moods and whims and never forced him to change. He also writes about his father and how he had dalliances with his leading ladies. At certain points he makes a mockery of himself like he mentions that once he wore a ladies trouser for a song. The book is an up close and personal account of the superstar of Bollywood.