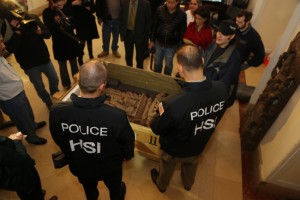 US returns recovered, ‘most wanted’ stolen antiquities to India at an event at the Indian consulate in New York.

New York, Jan 15 (IANS) India and the US turned to the gods to ease tensions after their month long diplomatic spat when the US returned three recovered, ‘most wanted’ stolen antiquities valued at over $1.5 million to India.

The objects, including a 350-pound sandstone sculpture stolen from an Indian temple in 2009 and listed as one of INTERPOL’s top 10 most wanted stolen works of art, were returned at an event Tuesday at the Indian consulate to consul general Dnyaneshwar M. Mulay. 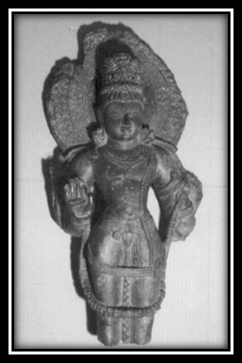 The male deity black sandstone sculpture depicting a Bodhisattva is believed to date back to the 11th or early 12th century from either Bihar or Bengal.

Devyani Khobragade, who worked as Mulay’s deputy at the time of her Dec 12 arrest and strip search on charges of visa fraud and underpaying her nanny, returned home last week after India declined to waive her immunity despite her indictment by a New York grand jury.

“The excellent international cooperation between the United States and India led to the recovery and return of these priceless antiquities,” said Dinkins. “The pilfering of a nation’s cultural patrimony cannot and will not be tolerated.” 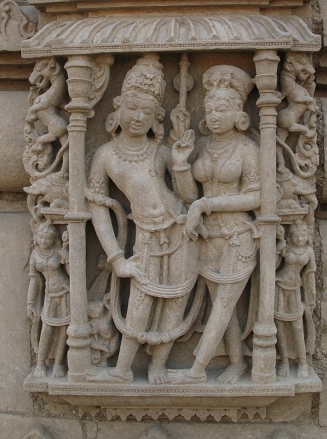 The 350-pound sandstone sculpture dates back to the 11th or 12th century and was listed as No. 6 on INTERPOL’s top 10 most wanted works of art.

“Prevention of illegal trade in antiquities has emerged as an important area of cooperation between India and the United States as can be seen from this recent recovery of stolen Indian antiquities,” said Mulay.

“The successful investigations and repatriation of these cultural artefacts underscores the importance of growing institutional partnership, which is of great significance to both countries.”

Two of the three artefacts returned to India were reported in 2009 by the Archaeological Survey of India (ASI), who notified the Indian Consulate about two sandstone sculptures stolen from the Gadgach Temple in Atru, Rajasthan, ICE said.

The 350-pound “Vishnu and Lakshmi” sandstone sculpture dates back to the 11th or 12th century and was listed as No. 6 on INTERPOL’s top 10 most wanted works of art. 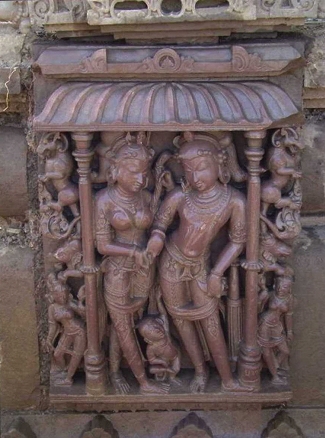 The 600 pound sandstone sculpture stolen from the Gadgach Temple in Atru, Rajasthan, is believed to date back to the 11th or early 12th century, from the Chandela Period

Also stolen from the temple and repatriated during the Jan 14 ceremony was the 600-pound “Vishnu and Parvati” sandstone sculpture, dating to the same period.

The third artefact is a male deity black sandstone sculpture, depicting a Bodhisattva, a popular subject in Buddhist art, and is believed to date back to the 11th or early 12th century from either Bihar or Bengal.

The investigation that led to this repatriation began April 13, 2010, when HSI New York special agents received information that the Indian sandstone sculptures recently looted from India were being offered for sale in the US.

HSI special agents discovered that the “Vishnu and Lakshmi” was transported from India to Hong Kong. From there, it was sold to a dealer in Thailand, and then resold to a buyer in London.

The London buyer shipped the sculpture to New York City for an exhibition in March 2010. On April 15, 2010, HSI special agents recovered the piece while it was being shipped back to London.

On July 7, 2011, the Indian black stone Bodhisattva figure was discovered being smuggled into the United States at Newark Airport by US Customs and Border Protection officers.

HSI special agents seized it after discovering that its accompanying paperwork declared Great Britain as a false country of origin. In addition, the item was grossly undervalued.

White House unveils plan to save domestic helps of diplomats