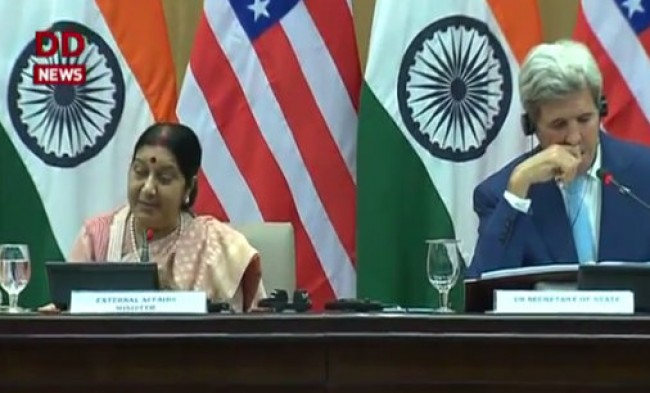 New Delhi, Aug 31 (IANS) The US on Wednesday reaffirmed its support to India’s membership in the Nuclear Suppliers Group (NSG) by redoubling efforts for an early entry.

A joint statement issued following the Second India-US Strategic and Commercial Dialogue here said that “in a further effort to strengthen global non-proliferation and export controls, both sides committed to redouble their efforts towards India’s early entry” into the NSG.

The Australia Group is an informal group of countries to help member countries to identify those exports which need to be controlled so as not to contribute to the spread of chemical and biological weapons.

According to a separate section of the joint statement, in support of India’s quest for clean energy, both sides “noted the progress made in bilateral civil nuclear cooperation and applauded continued engagement between Westinghouse and the Nuclear Power Corporation of India Ltd. toward finalising the contractual arrangements by June 2017 to build six AP 1000 reactors that will provide clean, reliable energy to millions of people in India”.

“They also looked forward to the immediate commencement of work on engineering and site design and the early conclusion of a competitive financing package based on the joint work by India and the US Export-Import Bank,” it said.

The US also extended support for the International Solar Alliance launched by Prime Minister Narendra Modi at the Conference of Parties (CoP)-21 climate summit in Paris in November last year.

“The United States affirmed its support for pursuing its membership of the International Solar Alliance (ISA), recognising the critical role it can play in the development and deployment of solar power,” the statement said.

“The sides also recognised the continued significance of efficient power generation technologies to address the challenges of climate change.”