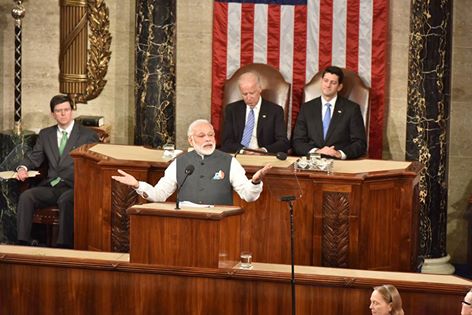 Washington, June 8 (IANS) Prime Minister Narendra Modi on Wednesday described the US as an “indispensable partner” of India and stated that a strong India is in the US’ strategic interest.

“In every sector of India’s forward march, I see the US as an indispensable partner,” Modi said in his much anticipated speech at a joint sitting of the US Congress.

“Many of you also believe that a stronger and prosperous India is in America’s strategic interest,” he said.

He said India could be an ideal partner for US businesses searching “for new areas of economic growth, markets for their goods, a pool of skilled resources, and global locations to produce and manufacture”.

“India’s strong economy, and growth rate of 7.6 per cent per annum, is creating new opportunities for our mutual prosperity,” the Prime Minister said.

“Transformative American technologies in India and growing investment by Indian companies in the United States both have a positive impact on the lives of our citizens.”

He also pointed out that today India was the destination of choice for American companies for their global research and development centres.

The Prime Minister thanked the US Congress for passing the India-US civilian nuclear deal in 2008.

“In the fall of 2008, when the Congress passed the India-US Civil Nuclear Cooperation Agreement, it changed the very colours of leaves of our relationship,” he said.

Turning to the Indian economy he said that his to-do list by 2022, the 75th anniversary of India’s independence was ambitious. “My to-do list is long and ambitious. But you will understand.

“It includes a vibrant rural economy with robust farm sector; a roof over each head and electricity to all households; to skill millions of our youth; build 100 smart cities; have a broad band for a billion, and connect our villages to the digital world; and create a twenty-first century rail, road and port infrastructure,” Modi said.

He also sought cooperation in the fight against terrorism and without naming Pakistan, said the scourge was “incubated in India’s neighbourhood”.

“In the territory stretching from West of India’s border to Africa, it may go by different names, from Laskhar-e-Taiba, to Taliban to ISIS,” Modi said.

“But, its philosophy is common: of hate, murder and violence,” he stated.

“Although its shadow is spreading across the world, it is incubated in India’s neighbourhood.”

He urged the members of the US Congress to send a clear message to those who preach and practice terrorism for political gains.

“Refusing to reward them is the first step towards holding them accountable for their actions,” he said.

Stating that the fight against terrorism has to be fought at many levels,” he said: “And, the traditional tools of military, intelligence or diplomacy alone would not be able to win this fight.”

Modi also hailed the achievements of the Indian diaspora in the US.

“Connecting our two nations is also a unique and dynamic bridge of three million Indian Americans,” he said.

“Today, they are among your best CEOs, academics, astronauts, scientists, economists, doctors, even spelling bee champions.”

The Prime Minister described the Indian Americans as the strength of the US and the pride of India.

He also brought in yoga, and much to everybody’s amusement, said that though there were 30 million practitioners of this ancient Indian physical exercise, India has still not claimed intellectual property right over it.

That Modi was not lacking in humour became evident when he compared the functioning of the US Congress with the chaos in Indian Parliament.

“I am informed that the working of the US Congress is harmonious,” he said much to everybody’s laughter.

“I am also told that you are well-known for your bipartisanship,” he said.

“Well, you are not alone. Time and again, I have also witnessed a similar spirit in the Indian Parliament, especially in our Upper House.”

Keeping to the India-US relationship theme, the Prime Minister concluded by quoting Walt Whitman: “The Orchestra have sufficiently tuned their instruments, the baton has given the signal.”