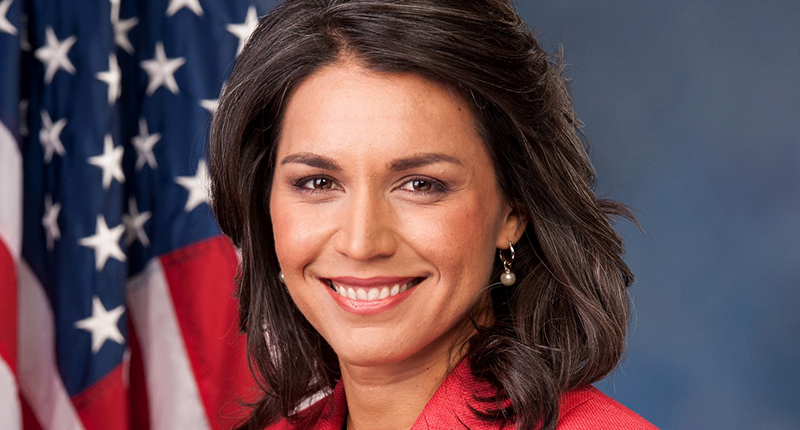 New York, Aug 30 (IANS) Tulsi Gabbard, the Hindu aspirant for the Democratic Party nomination for the US presidency, has been dropped by the party from the roster of ten candidates to feature in the next debate, dealing her campaign a setback and dimming its national exposure.

Gabbard accused the party leadership of using a process that “lacks transparency” in the decision to drop her from the third national debate on September 12, the line up for which was announced on Thursday.

While some like New York Senator Kirsten Gillibrand, who did not qualify for the third debate, have dropped out the race for the Democratic Party nomination to challenge President Donald Trump in next year’s election, Gabbard is continuing her campaign.

Kamala Harris, the California senator who is of Indian and African-Jamaican descent, has made the cut for the debate, although she is slipping in the polls.

The Democratic National Committee (DNC) reduced the number of candidates in the third debate to ten from the 20 in the first two by raising the threshold for participation requiring them to have at least 2 per cent support in four polls and financial contributions from a minimum of 130,000 individuals with at least 400 each from 20 states.

Gabbard met the financial requirement and got at least 2 per cent in four polls, but the DNC recognised only two of them.

In an interview to Fox News on Wednesday, she said, “The DNC has only recognised some of them as being qualifying polls for the debate. The whole thing gets a little bit confusing.”

“The bigger problem is that the whole process really lacks transparency,” she said.

“A small group of really powerful political elites, the establishment, making decisions that serve their interests, and maintaining that power, while the rest of us are left outside,” she added.

Gabbard, has rankled the party establishment with her independent opinions, some shaped by her military service in Iraq.

RealClear Politics (RCP), an authoritative source for tracking electoral politics, in its latest aggregation of various national polls puts former Vice President Joe Biden at the top with 28.9 per cent support, followed by Senators Bernie Sanders at 17.1 per cent, Elizabeth Warren at 16.5 percent and Harris at 7 per cent.

In RCP’s ranking, Gabbard comes ninth with 1.4 per cent. But the DNC recognised and moved up former Housing Secretary Julian Castro, whose average was only 1.1 percent and meeting the 2 percent threshold in only 2 polls, and Minnesota Senator Amy Klobuchar, who got only 0.9 per cent average in the RCP average of polls, ahead of her using a different criterion that takes into account certain state-level polls.

Gabbard’s has also had to contend with Google undercutting her campaign by suspending her ads at a crucial time when interest in her candidacy was soaring after the first debate.

She is suing the company in a federal court for $50 million for damaging her campaign and asking it stop Google “from further intermeddling” in the 2020 election, in effect censoring her.

Google denied the accusation and claimed the suspension was done automatically because her ad spending increased.

Gabbard, who is not of Indian descent but a Hindu, is a member of the House of Representatives from Hawaii.

She is a major in the Army National Guard, which is broadly like the territorial army, and has served on the war front in Iraq.

In the middle of the campaign, she was called to active duty for two weeks this month.

Drawing on her personal experience of war, she opposes interventions abroad by the US. She has been criticised for her opposition to bombings in Syria and for meeting that country’s leader Bashar al-Assad.

On domestic policies she veers left supporting universal health care and restrictions on corporations. Although she is now running against Sanders, a self-described democratic socialist, she backed him against Hillary Clinton in the 2016 primaries and resigned as a vice chair of the DNC to endorse him.

She has suffered from Hinduphobia and attacked as a “Hindu nationalist.”

In January she wrote in an article for Religious News Service that “some media outlets have chosen to craft a false narrative” of characterising her and her supporters as “Hindu Nationalists” and “targeting and profiling them.”

She wrote that she was branded a “Hindu Nationalist” for meeting Modi even though others like former President Barack Obama, President Donald Trump, Clinton and some members of Congress have also met him.

She added, “To question my commitment to my country, while not questioning non-Hindu leaders, creates a double standard that can be rooted in only one thing: religious bigotry. I am Hindu and they are not.”

Harris, who scored as high as 20 per cent in the polls after the first debate in June, has now slid to 7 per cent.

She has been criticized for her role as a strict prosecutor in California before becoming a senator and for changing her position on allowing private health insurance companies to operate.