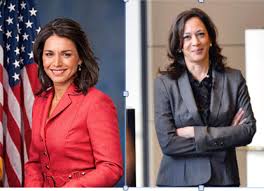 Gabbard, who is a Hindu American but not Indian-American, has raised more than $237,000, from the community. In comparison, Harris, daughter of an Indian American mother and Jamaican American father, has so far raised only $72,606 from the community, according to AAPI Data, which publishes data and policy research on Asian Americans and Pacific Islanders.

In a clear sign that Harris, one of the strongest contenders in the crowded 2020 Democratic field, has not been fully embraced by the community, the Senator even trails New Jersey’s Corey Booker among Indian-Americans, the American Bazaar reported on Saturday.

But Harris’ home state of California has the largest Indian American population in the country – more than 712,000. Yet, her campaign hasn’t received traction among Indian American campaign donors, the AAPI Data research reveals.

The Senator, however, received an important endorsement when the influential Indian-American Impact Fund announced that it is backing her earlier this week.

Harris, unlike Gabbard, has not made any attempts to reach out to the Indian-American community so far, even though she has repeatedly cited her Indian identity and her mother’s influence on her.

On the other hand, Gabbard, an Iraq war veteran and the first Hindu candidate to get elected to US Congress, has a huge grassroots following among right-leaning Hindu Americans, having closely aligned with them right from the beginning of her congressional career.

In the last presidential election cycle, the campaign of former Louisiana Governor Bobby Jindal attracted only lukewarm support of the community.

Most Americans favor pathway to citizenship for illegals