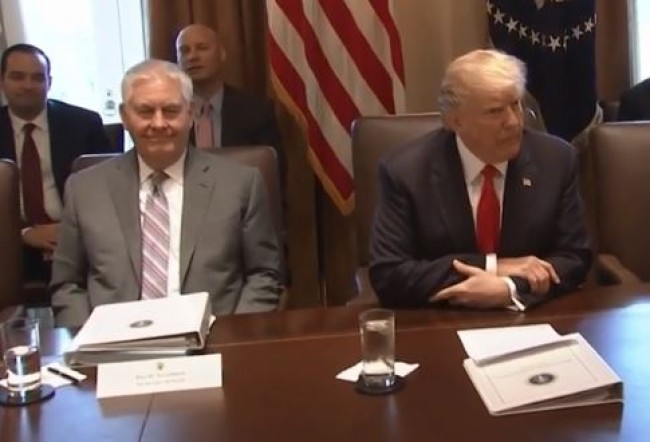 Pompeo, becoming the Secretary of State, will firm up the hardline leadership in the foreign policy and national security establishment, where those with military experience will dominate.

The change at the State Department is unlikely to have any impact on India as the influential national security establishment have signed off on Trump’s elevation of India’s role in South Asia and the Indo-Pacific region and the approaches to those regions in general.

Although the announcement came abruptly in a tweet, Trump told reporters later: “Rex and I have been talking about this for a long time.

“We got along, actually, quite well but we disagreed on things,” he said. “When you look at the Iran deal, I think it’s terrible, I guess he thought it was OK. I wanted to either break it or do something and he felt a little bit differently.”

Tillerson’s ouster follows the resignation of Trump’s top economic adviser, Gary Cohn, who resigned as the head of the National Economic Council this month.

Cohn, a former investment banker, opposed Trump’s policy of imposing taxes on steel and aluminum imports, highlighting the ideological splits in the administration between the hardliners and the pragmatists.

Tillerson, a former oil executive, was long considered out of the policy loop made up of hardliners, and confirming it, Trump said they did not discuss his planned summit with North Korean leader Kim Jong-un, the biggest foreign policy initiative of his administration so far.

Tillerson was on a tour of Africa to make amends for Trump’s reported statements denigrating the continent and cut short his trip and returned home. Illness was given last Friday as the official reason for his return.

Despite the humiliating firing with a tweet and calling back from a diplomatic tour, Trump asserted: “I actually got along well with Rex but really it was a different mindset, a different thinking.”

Trump named Gina Haspel as the CIA Director, a historic appointment that puts a woman at the head of the intelligence agency for the first time.

Pompeo and Haspel will have to be confirmed in their new posts by the Senate, a process during which the administration’s security and foreign policies will be under scrutiny.

Tillerson was upstaged by United Nations Permanent Representative Nikki Haley, a member of Trump’s cabinet, on many of Trump’s international priorities like Iran, North Korea, the Middle East and Afghanistan and Pakistan.

The first Indian American cabinet official worked in concert with the national security establishment on these issues, sidelining Tillerson.

On Monday, she visited the UN with National Security Adviser H.R. McMaster to brief Secretary-General Antonio Guterres and members of the Security Council on Washington’s initiative on Pyongyang, a job more likely to have been conducted by a Secretary of State in previous administrations.

The former head of the oil giant Exxon Mobil, Tillerson, was picked for the nation’s top diplomatic job by Trump last year to further US economic interests, an initial priority.

However, the priorities have shifted with North Korea, Iran and the Middle East taking centre stage.

He has reluctantly certified twice to Congress that Iran was complying with the terms of the nuclear agreement reached with it by the US along with the other Security Council Permanent Members and Germany in 2015.

Washington’s European allies – and China and Russia – stand behind the agreement. Although Washington acting unilaterally would end it, Washington would be isolated, a prospect Trump would not mind.

In contrast to Iran and the Middle East — where he upset the status quo by recognising Jerusalem as Israel’s capital, Trump — has made a dramatic move on North Korea after months of vitriolic exchanges with Kim Jong Un, by agreeing to a summit.

The foreign policy-national security establishment is now headed by people with military backgrounds.

Pompeo was a cavalry officer before entering politics as a member of the Republican Party’s right wing and getting elected to Congress.

McMaster is also currently a Lieutenant General, although the National Security Adviser post is held usually by civilians.

Trump’s Chief of Staff John Kelly is a former general, and even Haley has a military connection through her husband Michael, an Army National Guard officer, who has served in Afghanistan.

Haspel is a career CIA officer who was promoted to deputy CIA director last year.