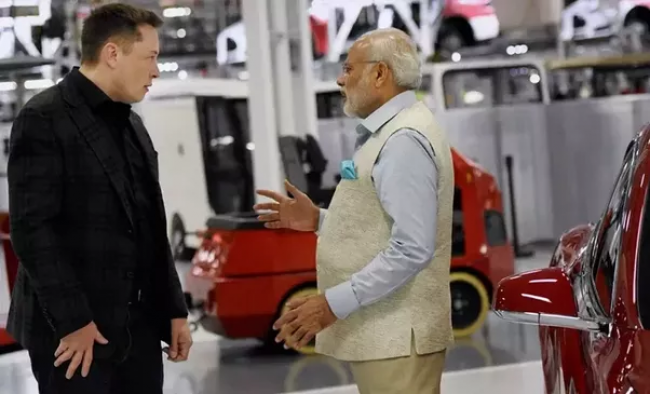 New Delhi, May 30 (IANS) Tesla CEO Elon Musk said on Wednesday that he would love to roll out Tesla electric cars in India but the tough government regulations have forced him to apply the brakes on his plans till date.

“Would love to be in India. Some challenging government regulations, unfortunately,” Musk tweeted in a response to a Twitter user who wrote “No Tesla in India” on his Twitter handle.

“Deepak Ahuja, our CFO, is from India. Tesla will be there as soon as he believes we should,” added Musk, also the SpaceX founder.

He holds Bachelors’ and Masters’ degrees in Materials Engineering from Banaras Hindu University and Northwestern University, respectively and an MBA from Carnegie Mellon University.

Last year, Musk said Tesla’s cars could come to India in the summer but there was no further news.

Musk later blamed the FDI norms for delay in Tesla’s entry into the Indian market.

“Maybe I’m misinformed, but I was told that 30% of parts must be locally sourced and the supply doesn’t yet exist in India to support that,” he had tweeted.

The Make in India’s Twitter handle replied back to Musk: “@elonmusk With respect to news reports on launch plans of Tesla in India being delayed, please note some key clarifications#MakeInIndia”.

Tesla was expected to enter India with Model 3 that sells for nearly $35,000. Prime Minister Narendra Modi visited Tesla headquarters at Palo Alto, California in 2015 and met Musk who gave Modi a tour of the company’s electric car plant.

“Prime Minister Modi and I talked about electricity generation and how there are ways to skip ahead with it as with cellphones,” Musk said later.

The Tesla founder on Monday revealed plans to install 10,000 Supercharger stations for his company’s electric vehicles around the world by 2019 end.

He tweeted a global map of the upcoming Supercharger stations, mainly in Europe, North America and China but not in India.

There are at present 1,229 Supercharger stations across the world, with 9,623 Superchargers installed which can charge an electric vehicle in just 30 minutes (nearly 80 per cent capacity).