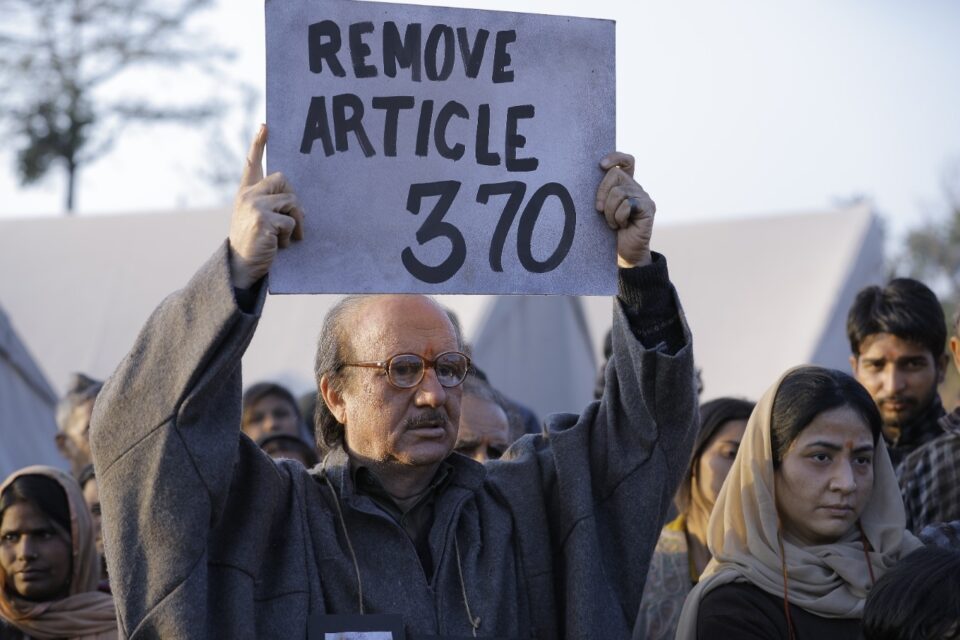 Based on actual incidents and narrated from the Kashmiri Pandit’s point of view, director Vivek Agnihotri’s ‘The Kashmir Files’ is a dramatized version of events that occurred in 1989.

The film, which showcases the plight of Kashmiri Pandits with all its grime and gore, begins on an innocuous note, with a euphoric cricket commentary on the radio in the backdrop of young Kashmiri children playing cricket in the snow-covered landscape.

Synchronizing their game to the radio commentary, young Shiva cheers for Sachin Tendulkar till his friend Abdul cautions him against doing so, and soon we realize why.

Told in a non-linear manner, initially, the plot meanders on a jerky note telling about us the atrocities perpetrated on Pushkar Nath Pandit (Anupam Kher) and his family. But soon, the tale takes the form of a cathartic film, when Pushkar’s four friends reunite after 30 years, at the behest of Krishna (Darshan Kumaar), Pushkar’s younger grandson, to scatter Pushkar’s ashes at his ancestral home in Kashmir.

They meet in the house of Brahma Bhatt (Mithun Chakraborty), an IAS officer who was the adviser to the Governor of Kashmir. The others in the room are Brahma’s wife Laxmi (Mrinal Kulkarni), Dr Mahesh Kumar (Prakash Belawadi), DGP Hari Narayan (Puneet Issar) and journalist Vishnu Ram (Atul Srivastava). Together, they represent the pillars of the state, who tackily decide not to address the elephant in the room, but then how long can one hold up pent-up feelings?

At the dining table, while discussing ‘nadru’ (lotus stems), Brahma recalls his time spent with Pushkar, and soon their resolution is broken.

Laying the cards on the table, mirroring what happened from the early 1990s till date, and packed with rhetorical questions, the film throws open a Pandora’s box.

Pallavi Joshi plays Radhika Menon, a professor at a prestigious Delhi college where Krishna studies and vying to be a student leader. She is the perfect trouble-monger with misplaced confidence, who instigates Krishna. “Make the government the villain,” she says, “and you’ll have a better negotiating power.” She performs in a stereotypical and perfunctory manner. So is the case with Chinmay Mandlekar, who essays the role of Farooq Malik Bitta, the debatable “terrorist or freedom fighter”.

On the other hand, Anupam Kher puts his soul into his performance and delivers an impressive Pushkar Nath Pandit. Equally remarkable is Mithun Chakraborty. But the actor who leaves an indelible mark on screen is Darshan Kumaar, who, as Krishna, is striking, especially during his speech in the climax.

Mounted with ace production values, the visuals, except for a few frames, do not boast of any cinematic brilliance. Nevertheless, the film is relatable, and you get sucked into the narrative.

Overall, the film is engaging and like one of the dialogues, which tells us, “Broken souls don’t speak — they must be heard”, ‘The Kashmir Files’ is the voice of tens of thousands of Kashmiri Pandits who were forced to leave their homes.