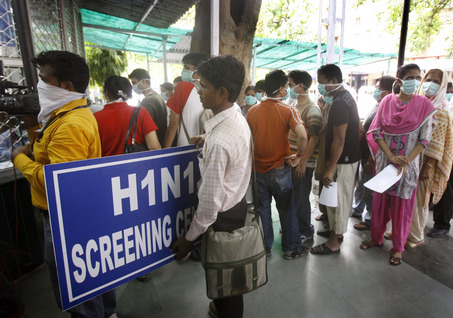 Washington, March 12 (IANS) Swine flu – influenza A (H1N1) pandemic 2009 virus – that has killed over 1,500 people and left more than 27,000 people infected in India has acquired mutations that make it more dangerous than previously circulating strains of H1N1 influenza, a team of Indian-origin scientists from the Massachusetts Institute of Technology (MIT) has discovered.

The findings, reported in the scientific journal Cell Host & Microbe, contradict previous reports from the Indian health officials that the strain has not changed from the version of H1N1 that emerged in 2009 and has been circulating around the world ever since.

The flu virus in India seems to have acquired mutations that could spread more readily and, therefore, requires deeper studies, they warn.

“We are really caught between a rock and a hard place, with little information and a lot of misinformation,” said Ram Sasisekharan, the Alfred H Caspary professor of biological engineering at the MIT and the paper’s senior author.

“When you do real-time surveillance, get organised and deposit these sequences, then you can come up with a better strategy to respond to the virus,” he added.

To reach this conclusion, Sasisekharan and MIT research scientist Kannan Tharakaraman compared the genetic sequences of those two strains to the strain of H1N1 that emerged in 2009 and killed more than 18,000 people worldwide between 2009 and 2012.

The researchers found that the recent Indian strains carry new mutations in the hemagglutinin protein that are known to make the virus more virulent.

Hemagglutinin binds to glycan receptors found on the surface of respiratory cells and the strength of that binding determines how effectively the virus can infect those cells.

One of the new mutations is in an amino acid position called D225 which has been linked with increased disease severity. Another mutation, in the T200A position, allows hemagglutinin to bind more strongly to glycan receptors, making the virus more infectious.

With very little scientific data available about the new strain, the MIT researchers stress the need for better surveillance to track the outbreak and to help scientists to determine how to respond to this influenza variant.

“There is a real need for aggressive surveillance to ensure that the anxiety and hysteria are brought down and people are able to focus on what they really need to worry about,” Sasisekharan emphasised.

“We need to understand the pathology and the severity, rather than simply relying on anecdotal information,” he pointed out.

With very little scientific data available about the new strain, the MIT researchers stress the need for better surveillance to track the outbreak and to help scientists to determine how to respond to this influenza variant.

In the past two years, genetic sequence information of the flu-virus protein hemagglutinin from only two influenza strains from India has been deposited into publicly available influenza databases, making it difficult to determine exactly which strain is causing the new outbreak, and how it differs from previous strains.

Learning more about the new strains could help public health officials to determine which drugs might be effective and to design new vaccines for the next flu season, which will likely include strains that are now circulating, the authors concluded.