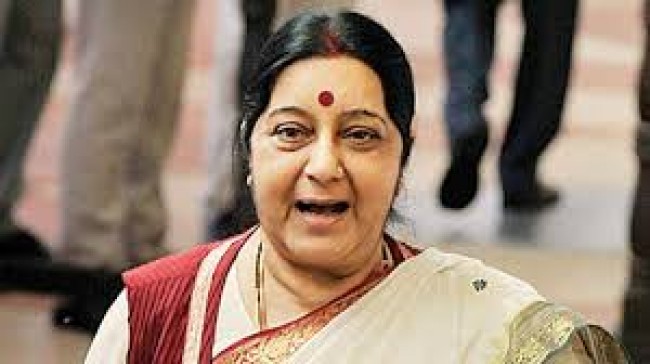 Mumbai, June 25 (IANS) Bollywood celebrities Swara Bhaskar and Vishal Dadlani have spoken out for External Affairs Minister Sushma Swaraj, who has faced trolls over a row involving the issue of passports to an inter-faith couple in Uttar Pradesh.

“I was out of India from 17th to 23rd June. I do not know what happened in my absence. However, I am honoured with some tweets. I am sharing them with you. So I have liked them,” Sushma Swaraj, who was on a visit to Italy, France, Luxembourg, Belgium and the European Union, wrote on Twitter while “liking” some tweets abusing her.

Swara and Vishal said it was shameful that the Minister had to face the trolls.

“It is sick and shameful, the kind of vicious trolling Sushma Swarajji is being subjected to because she and her Ministry did their job conscientiously and as per the law of our land. Sad that the anti-minority hate by bhakts in our public discourse now doesn’t spare their own leaders,” tweeted Swara.

Vishal wrote: “Jai Ho. The one amongst them who has been working with compassion and without discrimination. Naturally, they couldn’t handle it. The least we citizens can do is tell Sushma Swarajji that we appreciate her work. Thanks for rising above the atmosphere of petty hatred, Ma’am!”

The trolling happened after Vikas Mishra, an officer in the regional passport office in Lucknow, was transferred after he allegedly humiliated an inter-faith couple, asking the woman to change her last name and the man to convert to Hinduism.

Later, passports were issued to the couple and they thanked Sushma Swaraj and her Ministry.

However, a section on the social media began posting tweets with #ISupportVikasMishra hashtag, expressing ire towards Sushma Swaraj.

On the trolling, comedian Vir Das questioned: “So wait. You’re telling me the little monsters your parties created, followed, endorsed and professionally paid to abuse and threaten everyone are out of control and turning on your people too? That seems so surprising?”