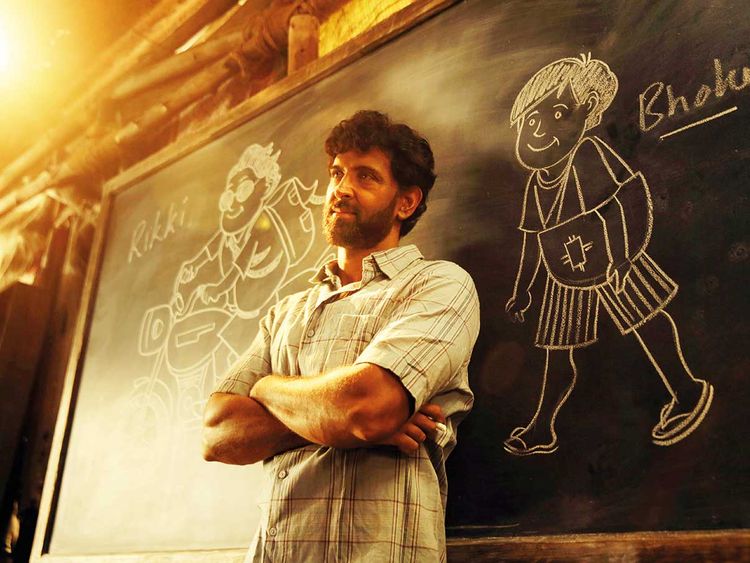 (The film is a biopic of Patna-based educationist Anand Kumar –played by Hrithik Roshan — a math wiz hailing from the marginalised section of society. Kumar struggled against the odds to successfully set up the Super 30 programme, which provides free higher education to deserving IIT-JEE aspirants from underprivileged families as his.)

It is easy to see why Hrithik Roshan signed “Super 30”. Deemed Bollywood’s resident Adonis and little else for long despite some credible performances over the years, the superstar was out to de-glam. He needed to nail that one role which would remain top-of-the-mind recall every time you spoke of his acting skills.

At a time when Bollywood is rediscovering heartland stories, and when issue-driven cinema has become more saleable than ever, playing a small town educationist who revolutionised coaching facility for the underprivileged would seem to fit the bill. Being Anand Kumar was a smart move for Hrithik.

The problem is everything about the film is insistently crafted to suit that purpose. “Super 30” comes across more as Hrithik’s desperate bid to prove that he can shed his stardom, than an honest storytelling effort of an intriguing life.

You realize as much watching the actor go, struggling to deliver the essential Bihari accent as Anand Kumar might have done it. Hrithik’s utterly bronzed face, meant to match Kumar’s average looks, is far from what will fetch the film’s make-up artist an award or two, and as the superstar does his best to keep those bulging biceps well inside his sleeves to resemble the medium-framed Kumar, the effort is inadvertently comic.

Anand Kumar’s life deserved a super film. However, mainstream Bollywood, bogged down by innate commercial diktats, rarely creates anything that is super. Done in by shoddy scripting (Sanjeev Dutta) and elaborate melodrama, director Vikas Bahl’s new film takes too long to finish its tale. The film should have been a good 40 minutes shorter.

The irony that hits you as the flawed narrative labours on is that the tale is actually a well-intentioned one. The film talks about the caste and class divide that brazenly continues to thrive in our society. It advocates right to education for all. At heart lies the true story of an underdog achiever who beat near-insurmountable odds to achieve what he wanted. Most importantly, the film is an ode to teachers, a community whose significance is rapidly fading in our society.

Yet, all of the above is done in by sheer plasticity. All deliberation on cast and class discrimination, for instance, would seem like mere excuses to stuff in some heavy dialogues. On the subject of education for all, which forms the crux of the screenplay, the film never seems interested in genuinely understanding the socio-politics that scuttles it. Anand Kumar’s life story, far more dramatic than most fictional underdog achievers Bollywood routinely peddles, never really gets the scope to overwhelm.

A strictly okay first half has 45-year-old Hrithik traipsing down narrow smalltown lanes in a bid to pass off as a 20-something Anand Kumar. The fact that he is a genius in mathematics is discovered early on, and he gets a rare opportunity to go to Cambridge to pursue higher studies. Anand’s family, however, fails to raise the funds for the trip and it is curtains for his dream. A series of tragic incidents follow, including the death of his father (Virendra Saxena), a postman. Soon, Anand is selling “paapad” on the streets.

The screenplay looks like it would take an interesting turn when a rich, moneyminded coaching institute owner named Lallan Singh (Aditya Shrivastava) offers him a cushy job as a professor, and Anand accepts. However, the faint promise of grey shades at this point is never really explored. As Anand quits the institute to start Super 30, his own academy for underprivileged but meritorious IIT-JEE aspirants, an insipid second half is in store.

Incredibly so, for this should have been the interesting half. Instead, much footage is wasted in setting up a hero-versus-villain showdown between Anand and Lallan, with a corrupt education minister (Pankaj Tripathi) thrown in for good measure.

Hrithik Roshan best roles so far (“Koi Mil Gaya”, “Zindagi Na Milegi Dobara”, “Guzaarish”, “Jodhaa Akbar”) have all been acts where he got the scope to effectively use his screen presence and emotive eyes. Vikas Bahl, who made the brilliant “Queen” in 2014, would be expected to hit bullseye with the actor in this context. What you get instead is a performance that is more played to the gallery than convincing.

Rather, the prop cast is more impressive. Newcomer Mrunal Thakur makes most of her limited presence in the script to leave an impact. Aditya Shrivastava is believable as the rapacious Lallan, who is unscrupulous about making a trade out of education. Pankaj Tripathi, as always, is a delight, rendering his corrupt minister with a mix of the sinister and the comic.