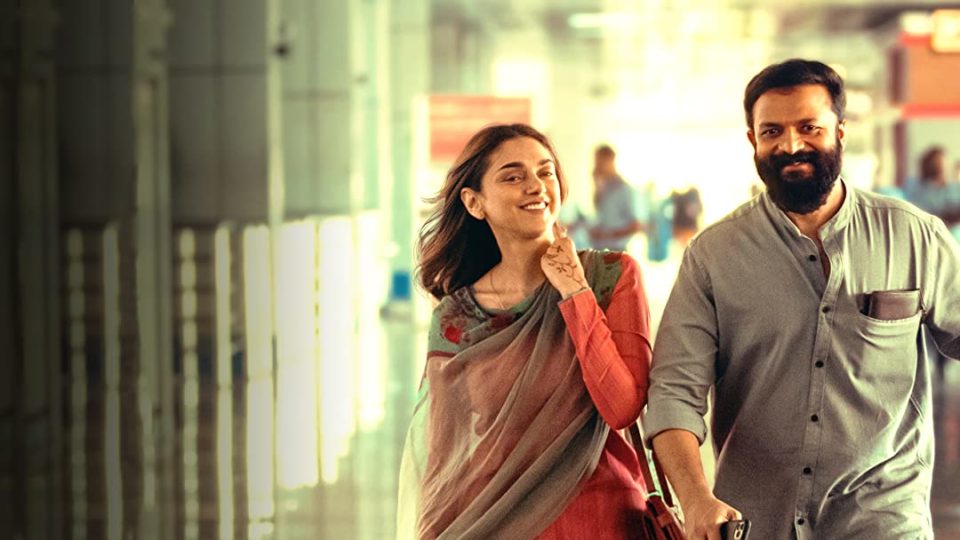 Quite often in mainstream cinema, the script is not enough. Short of a storyline that might engage the viewer, packaging becomes all-important for the filmmaker, to ensure proper hardsell.

“Sufiyum Sujatayum” tries to cover up its lack of an engrossing plot with lots of striking asides. There is a liberal sprinkle of Sufi vibes all over the spread, in a bid to set up a mystical milieu. Mystique in fact seems to be the operative mantra that dictates the photography (Anu Moothedath), and to ensure you don’t forget the romance here is supposed to be seeped in ‘Sufiyana andaaz’, a recurring theme song has the word ‘rooh’ after what seems like every half a sentence.

Whirling dervishes, dreams of Sufi saints taking flight heavenwards — you name it, they have it. There is the odd qawwali in Urdu/Hindi thrown in, too (admittedly, music is a high point of the film).

Heck, even the hero’s name is Sufi.

He is Sufi, she is Sujatha. So the film is called “Sufiyum Sujatayum”.

Writer-director Naranipuzha Shanavas has imagined Sujatha (Aditi Rao Hydari) as a mute girl from a well-to-do Brahmin family in the village. Sufi (Dev Mohan) is a young Sufi mystic. Sujatha is attracted to him primarily due to his sonorous voice, when she hears him chant the ‘azaan’ at a nearby mosque. Their bond grows through music and dance (she is a kathak exponent, while his dervish spin on one toe is a killer move).

In a bid to make their story interesting, the film uses parallel narratives. When we first meet Sujatha, she is married and lives with her daughter and husband in Dubai. Their return to India, necessitated by the film’s only important plot twist right at the start, creates scope for Sufi and Sujatha’s (not surprisingly tragic) back story to be told alongside what happens when she returns to the village.

Well, not much happens — at least, not much that might let Aditi Rao Hydari engage in any relevant sort of drama. Rather, we get a sizeable footage involving Sujatha’s husband Rajeev (Jayasurya), whose biggest challenge is to find ways of fuming in varied degrees of exasperation.

“Sufiyum Sujatayum” tries talking of a lot of things. It sets up a token conversation on love jihad. Sujatha’s mute persona is perhaps symbolic of the fact that the average Indian woman still has no voice, even when it comes to her own life. Class prejudice shows up in a scene that depicts the shoddy treatment roadside cops reserve for a cab driver, just as communal prejudice runs all through the narrative while showing us the attitude Sujatha’s folks mete out to Sufi.

The symbolism inherent in most of these ideas is rather in your face, sinking under plastic passions.

A lot of the film’s publicity has been spun around the fact that this is Aditi Rao Hydari’s debut in Malayalam cinema. Given the fact that she has no dialogue, the film might as well have been in Hebrew. Aditi’s lack of words meant the right expressions and body language were vital. She gets it right in a few scenes but struggles to emote in most parts, given the sketchy writing.

Debutant Dev Mohan’s understated act is impressive. He does impart a soulful impact with his gaze. Yet, for all the authorback advantage that the screenplay allows them, Aditi and Dev simply cannot manage to strike up a chemistry that might have bailed out this love story. As a man dedicated to higher powers who falls for Sujatha, we would expect Sufi to reveal some inner turmoil, too. There is none.

There is a bit of Mani Ratnam’s style apparent in Naranipuzha Shanavas’ filmmaking. Slices of life as the camera captures, the use of music (M. Jayachandran) and song picturisation, as well as the Sufi-Sujatha romance at various stages could remind you of “Bombay” or “Mouna Ragam”. The problem is Shanavas perhaps overlooked the fact that sort of a cinematic treatment would seem fresh about two and a half decades ago.

'Shaadi Ke Side Effects' – looking into a marriage, with a smile