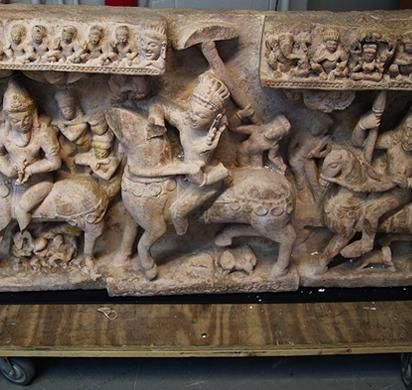 A stolen buff sandstone panel depicting Revanta and his entourage, was seized by US officials from the auction house Christie’s on Friday, March 11, in New York. It is from the 8th Century A.D., approximately 76 cm by 135 cm, depicting a very rare representation of the equestrian deity, Revanta, a son of Surya, and valued at approximately $300,000. (Credit US Customs/IANS)

New York, March 13 (IANS) Four days before two ancient Jain and Hindu statues estimated to be worth $450,000 were to be auctioned off, US officials swooped on the international art auction house Christie’s here and seized them, according to the Homeland Security Department.

The statues seized Friday by Homeland Security Investigations (HSI) special agents in “Operation Hidden Idol” were of Rishabhanata, the first Jain Thirthankar, and of Revanta, a son of God Surya, the HSI said. They were to have been auctioned on Tuesday during Asia Week in New York, an event that draws top-tier art collectors and museum curators from around the world.

Christie’s said it was unaware the statue of Rishabhanata and the panel of Revanta were stolen in India and brought into the US illegally.

On behalf of the Indian government, Consul General Riva Ganguly Das commended the “HSI for the exceptional work done in locating and retrieving the sculptures brought into the United States by organised crime syndicates.”

The 10th century Rishabhanata sandstone statue is from Rajasthan or Madhya Pradesh and is valued at about $150,000, according to the HSI. It stands about 57 centimetres tall and depicts the Tirthankar seated in vajrasana position (crossed leg pose) and flanked by two devotees.

The sandstone panel of Revanta and his entourage is from the 8th century. It is considered “a very rare representation of the equestrian deity”, and is estimated to be worth $300,000, according to the HSI.

In its statement, the HSI acknowledged the assistance of the government of India and Interpol in its investigations carried out with the Manhattan district attorney Cyrus Vance’s office.

Christie’s had included the two artifacts in an auction entitled “The Lahiri Collection: Indian and Himalayan Art, Ancient and Modern,” during Asia Week New York, the HSI said.

The event’s organiser, the Asia Week New York Association, billed it on its website as “a collaboration of top-tier Asian art specialists, major auction houses, and world-renowned museums and Asian cultural institutions” in the New York area. Nineteen art dealers are participating in the India and Southeast Asia segment and have listed a range of art ranging from modern and ancient paintings and miniatures to bronze sculptures and artifacts.

HSI, which is part of the Immigration and Customs Enforcement division of the Homeland Security Department, said the Rishbhanata statue “appears to have been sold by Oliver Forge to London-based Brandon Lynch Ltd. between 2006 and 2007”.

And the Revanta panel, “according to images provided by the source dealer, appeared to have contained an ‘orphan fragment’, a piece perfectly broken off to be sold by the smugglers after the sale of the main part of the sculpture”, the HSI said.

In its four years “Operation Hidden Idol” has uncovered networks of temple-looters preying on India. In what is probably the biggest ever ancient artifact crackdown, the HSI and the Manhattan district attorney’s office announced last July they had seized over 2,500 items worth over $100 million from a single network allegedly run by art dealer Subhash Kapoor.

He is in custody in Chennai in connection with alleged temple thefts from the state.

The HSI said that in the past 12 months, four US museums and one major collector have surrendered illicit cultural property linked to Kapoor. One of them was a statue of the poet Manikkavichavakar taken from the Sivan temple in Sripuranthan village in Tamil Nadu. It is estimated to be worth $1 million.

In addition, Australia has returned to India a 900-year-old Chola-era bronze Nataraja and a stone statue of Ardhanariswara from around 1100.