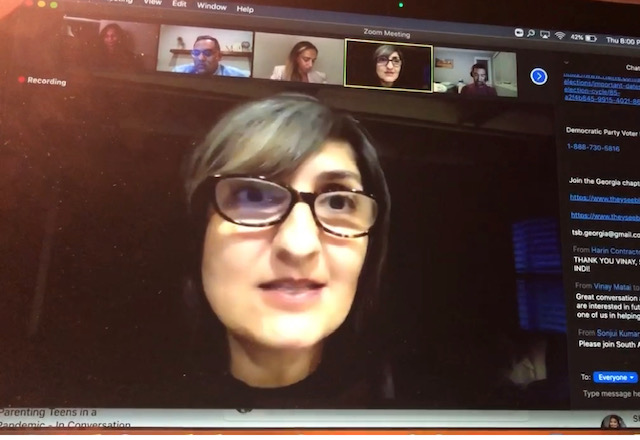 “It is exciting for me to kind of bring all the voices together and amplify them as one,” said Anjali Enjeti who serves on the core team of They See Blue. Enjeti kicked off the Town Hall with the introduction of the organization which was incepted in the summer of 2018 in the Bay Area. They See Blue currently operates 20 chapters across the country. The Georgia chapter began in August 2019. Urging everyone to vote one way or another, either through absentee ballot, early voting or on election day, Enjeti provided relevant material to all attendees.

“There is a night and day sort of distinction here between the current administration and what Joe Biden has put out,” said Dr. Parekh addressing a clinical health psychologist in Georgia who wanted to know how the Biden administration would prioritize the mental health crisis that existed prior to the pandemic and especially risen through the pandemic and how the administration would address accessibility, stigma and affordability of health care.  Dr. Parekh said Vice President Biden has put out some plans to end the opioid epidemic, tackle substance abuse and mental illness, an epidemic prior to COVID-19, which he said has now been “exacerbated”. “I think we would all agree that the best way to in the immediate term to tackle mental illness is to curb and suppress the pandemic virus,” he said. Dr. Parekh noted that in order to increase access to health insurance coverage can be achieved through the public option, Medicaid, and enhancing the individual market. “You need to enforce mental health parity, so all insurers are providing coverage for mental health services. The current administration has not really pressed forward at a federal level or press state partners. To do that. You need to tackle suicide and suicides continue to go up for subpopulations, like veterans, LBGT youth as well as others.”

“A lot of our plans have really focused on what we can do to take the businesses that have been struggling and really support them,” said Sadanandan, addressing a question from a commercial property owner who expressed concern about their small-business tenants unable to pay rent in COVID times and wanted to know the plan to protect struggling small businesses against larger corporations. “One thing that we’ve seen through COVID is that even where there were attempts made to make money available. Much of that money ended up in the pockets of Trump’s friends. And so that’s something that Joe Biden and Kamala Harris are incredibly aware of, in our racial equity agenda,” said Sadanandan. She added that the administration will outline a plan to make sure that resources go to small businesses owned by people in the API community, adding there were different components to this both in terms of expanding the resources, and warranting those resources become accessible to folks. “What I can say today is that we are listening, we’re paying attention to what’s happening. And we are working with some of the smartest and most thoughtful experts in the field to have how to make sure that we protect and support those businesses that are facing closure. Now.”

“He has absolutely been a leader on maintaining attachment between employers and employees during these crises through the unemployment insurance system, specifically a program called worksharing,” responded Dutta-Gupta. Ensuring programs like PPP and others are focused towards small businesses, and ensuring people who actually need it, gets it through community institutions and expanding the size of money, he said was on the agenda. “The tax revenues that the Vice President’s proposals rely on in the long run, not for emergency COVID sort of 19 relief funding, but they very much focus almost all of the revenues on larger businesses, higher income individuals and households,” added Dutta-Gupta referring to giants like Amazon, cited in the question.

“We have to confront the issues of systemic racism which are emerging in productive and unproductive ways,” responded Sadanandan to a question from a woman-owned special events company in Atlanta, who wanted to know Biden Administration’s  plan post COVID to address issues faced by BIPOC and women small business owners, who, she said are in an industry that doesn’t have any lobbying for them, because it is made up of thousands of small businesses that supports larger corporations. “Instead of having a president who is able to calm people, to provide solutions, to be responsive, to be reasonable in the way that the vast majority of Americans are reasonable, he is stoking the flames because that benefits him. So, one big change with Joe Biden and Kamala Harris is you’re going to have leadership that is going to be reasonable that is going to be responsive, that that absolutely is going to seek to address the underlying issues that are causing the type of discord that we see,” she added. At the heart of some of this discord, Sadanandan said, is a lack of infrastructure and investment in communities of color. She went to elaborate the racial equity plan, which she described as a “historic investment in infrastructure”, and a way to look at safety and health in a “holistic” way. “When we talk about the type of infrastructure investment that Joe Biden and Camilla are prepared to make, we know that it is going to be an economic multiplier. And at top of mind is that people of color, the API community, and women in particular, who have historically been locked out,” she noted. Sadanandan, who helped author the racial equity plan, said every aspect of the program is about unlocking the potential of bipoc communities.

All panelists chimed in to a question from a physician, who raised concern over PPE, medical equipment, supplies and prescription drugs, being relied on foreign entities that aren’t necessarily America’s allies. He wanted to know if Biden administration had a plan in which they would look at either having our allies produce these things and or bringing all that stuff home. The team responded that there is an extensive plan for developing, maintaining and protecting national supply chains, especially as it relates to public health and other threats, and also creating good jobs in the US. The team said they are committed to implementing a coordinated countrywide future facing national effort to acquire, produce and distribute PP test kits, machines, lab supplies and other critical supplies, including by fully utilizing the authorities under the defense production act, adding, they plan to elevate the issue especially since it ties in health and economy.

“We have never had a presidential nominee with the type of transformative criminal justice policy reforms that the one that we have here today, the reforms that we’re talking about are about real safety. When we’re talking about safety, we’re talking about where we live, where we work, where we play. It’s not just about stopping crimes. Once crime occurs, and in our response, it’s about preventing the circumstances that create environments where crime will occur in the first place. And this is the plan that will transform our approach to the criminal justice system. This is the plan that centers people of color in thinking about how to approach public safety,” said Sadanandan in response to an audience question about senator Biden’s changing decision patterns on issues of criminal justice reform.

Sadanandan touched upon The Build Back Better plan, in response to a climate change query, saying the plan draws focus on the need to invest in new clean energy economy. “This is the key distinction between the President and Joe and Kamala. We believe climate change is real. We think about it in terms of science, technology, research, infrastructure, and jobs.”

Addressing issues about the cap on immigration and the recent rebuke of H1B visas by President Trump, Sadanandan said the Biden team has “thoughtfully” laid out plans to fix the immigration system. “As president, Joe Biden will increase the number of visas offered for permanent work-based immigration based both on macro-economic conditions and exempt from any cap recent graduates with PHD programs in some fields. He is going to support first reforming the temporary visa system for high skilled specialty jobs, protect wages and to protect workers. And he is going to expand the number of visas offered and eliminate the limits of employment based green cards by country which have kept so many Indian families in waiting for far too long.