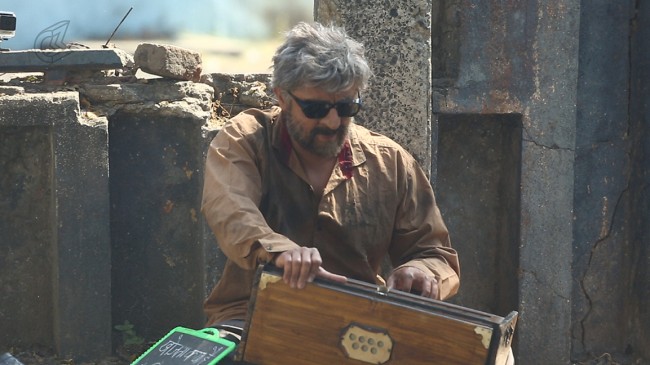 Mumbai, May 17 (IANS) Bollywood singer Sonu Nigam, who has been enthralling fans with his melodious voice for over two decades now, slipped into the garb of an aged street performer for a newly released web video.

The video, titled “The Roadside Ustaad”, was released on Culture Machine’s digital channel Being Indian on Tuesday. It is an experiment done on the busy streets of Juhu, Mumbai to see how the pedestrians react to the singing of an old man.

“The Roadside Ustaad” captures mixed reactions of commoners ranging from individuals stopping by and enjoying the old man’s singing to those who nonchalantly walk away, all of them oblivious to the fact that the old man is Sonu.

Talking about the initiative, Sonu said in a statement: “I went (on to do this video) without any expectations, totally bereft of any awkwardness for the way I was looking and what I was about to subject myself to.

“For the first time, I was not me. The make-up was so good and authentic that people standing so close to me, couldn’t recognise.”

In the video, he is seen with a harmonium.

The Roadside Ustaad: Play the Video

He further shared that the musical instrument was the same one that his parents bought when he was born.

“It was all so humbling. And from such an unfamiliar zone, I managed to procure something. Gratitude, grace and appreciation for what we have,” he said.

Further talking about the reason behind making this video, Karl Katgara, creative director at Culture Machine, said: “The whole idea behind this experiment was to inspire people to take a moment out of their busy lives and appreciate the beauty of music.

“To do this, who better than Sonu Nigam. He is one of the most sought after singers in the country, and the most recognizable voice. What was interesting to see at the time was, he created the same magic singing, just disguised as an old man, and people could not recognise him at all.”

Consulate to celebrate International Day of Yoga on June 26