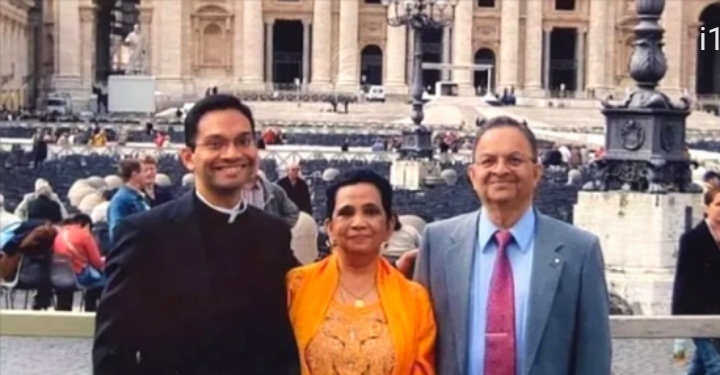 Columbus, Ohio, April 13, 2022: An Indian-American priest, Rev. Earl Kenneth Fernandes, 49, will have the distinction of becoming the first Indian-American bishop of the Roman Catholic Church in the United States, after he was named bishop-elect of Columbus, Ohio. He will also be the first person of color to serve as the bishop of the Diocese of Columbus, as well the youngest diocesan bishop in the United States.

The announcement on April 2, 2022, was made by Archbishop Christophe Pierre, the Papal Nuncio to the United States. The new Bishop will be consecrated and installed as the 13th bishop of Columbus (Ohio) on May 31, 2022. Rev. Fernandes has roots in Mangalore, Goa, and Mumbai.

Born on September 21, 1972, in Toledo in Ohio to Sidney Oswald Fernandes and Thelma Fernandes nee’ Noronha, who migrated to the USA from the western Indian metropolis of  Bombay (now Mumbai) in the early 1970s. Fr Earl has four brothers: Karl, Trevor (who is a Catholic deacon), Ashley, and Eustace – Trevor is a Magistrate and others are medical doctors.

Rev. Fernandes obtained his bachelor’s degree in biology from the University of Toledo in 1994 and went on to study physiology at the University of Salford. It was in his second year of medical studies at the University of Cincinnati that he felt the call of the Lord to serve Him. The bishop-elect, did his priestly formation at Mount Saint Mary’s of the West in Cincinnati and bagged a master’s in Theology in 2002. He attributes his deep faith and vocation to the exemplary prayer life of his mother, a teacher, and his father, a physician.

Rev. Fernandes was ordained a priest on May 18, 2002, for the Archdiocese of Cincinnati and two years later he went to Rome to earn a licentiate and doctoral degree in moral theology from the Alphonsian Academy.  Fr Earl served as vicar of Holy Angels parish and was a religious teacher at Lehman Catholic High School from 2002 to 2004.

He has also served as the dean and assistant professor of moral theology at Mount Saint Mary’s of the West seminary from 2008 to 2016. He served as a member of the executive committee for the National Association of Catholic Theological Schools and was appointed a Missionary of Mercy during the extraordinary Jubilee Year of Mercy from 2015 to 2016. He served on the staff of the nunciature for three and a half years.

A board of trustees member of the Pontifical College Josephinum in Columbus, Fr Earl is fluent in Spanish, Italian and French apart from having a reading knowledge of Latin – both his parents have an old Konkani Catholic background.

The diocese, spread across 11,310 square miles in the state of Ohio, has 207,041 Catholics out of a population of 2,828,514.  He will be the first Indian-American bishop of the Latin Church in the United States, and will be the first person of color to serve as the Bishop of the Diocese of Columbus, aged 49 years, he is the youngest diocesan Bishop in the United States, upon ordination.

In his first public speech Bishop-elect Rev, Fernandes said,  “This America is the land of opportunity, there is a great deal of pride (in being the first Indian-American bishop).”

The fourth of five sons born to Indian immigrants in Toledo, young Earnest remembers celebrating the U.S. bicentennial on July 4, 1976, holding signs with his four brothers. His father, who memorized the Constitution before taking his citizenship test, had fashioned together his own version of the Liberty Bell. Rev Fernandes is a self-described “young and happy priest”.

Sundar Pichai announces $9.5 bn for new offices, data centers in the US