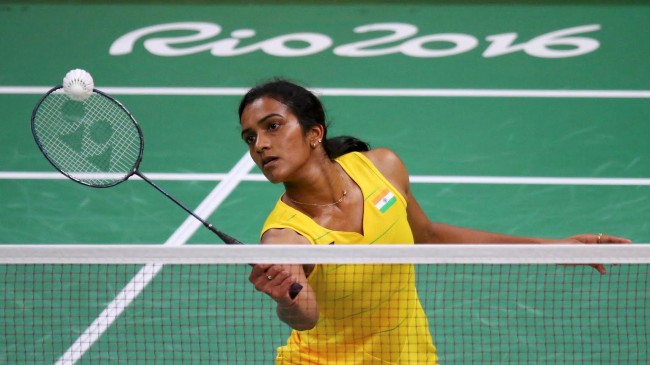 Rio de Janeiro, Aug 19 (IANS) Indian shuttler P.V. Sindhu settled for silver at the Rio Olympics after being beaten 21-19, 12-21, 15-21 by World No.1 Carolina Marin of Spain in the badminton women’s singles event here on Friday.

It is India’s second medal in the Rio Games after wrestler Sakshi Malik bagged bronze in the women’s 58 kilogram category on Wednesday.

In a hard-fought summit clash, which lasted one hour and 20 minutes, fortunes fluctuated dramatically at the Riocentro – Pavilion 4.

Sindhu became the first Indian woman to win silver at any discipline at the Olympics.

The Indian shuttler started on a positive note but after 3-3, the Spaniard dominated the proceedings and took four consecutive points to lead 7-3 and then 9-5.

Unperturbed by the pressure of the occasion and her towering opponent, Sindhu controlled her nerves and displayed swift court movements and hit bodyline smashes to diminish the lead to 13-15.

World No.10 Sindhu, who was trailing 16-19 at one point, fought her heart out and took five points on the trot to claim the first game in 27 minutes.

Carolina, who can annoy any player with her shuttle retrieving techniques, looked like a spectator as it was Sindhu who reversed the roles to clinch the first game 21-19.

In the second game, Carolina, dubbed the “Girl Nadal in Spain” after male tennis star Rafael Nadal, attacked from the start. The Indian couldn’t manage to control the torrent of attacks and trailed 2-11 at the mid-game break.

After the break, Sindhu tried to bounce back and displayed a lot of power and strength to dismantle the strategy of the Spanish opponent but failed and relinquished the second game 12-21.

In the decider, Carolina got off to a flying start as she took a five-point lead in the initial stage at 6-1.

But Sindhu, who was on a giant-killing spree after dismissing two higher-ranked opponents in competition, displayed grit to pull level at 10-10. Carolina went into the mid-game interval leading by a slender one point margin.

After the breather, the duo continued to fight for each point valiantly but it was the more experienced Carolina who proved superior. Sindhu though kept herself within a touching distance of Carolina at 14-16.

But Sindhu was left powerless when Carolina upped the ante to pull ahead 19-14. She edged closer to match point with a half smash and eventually clinched the contest 21-15.