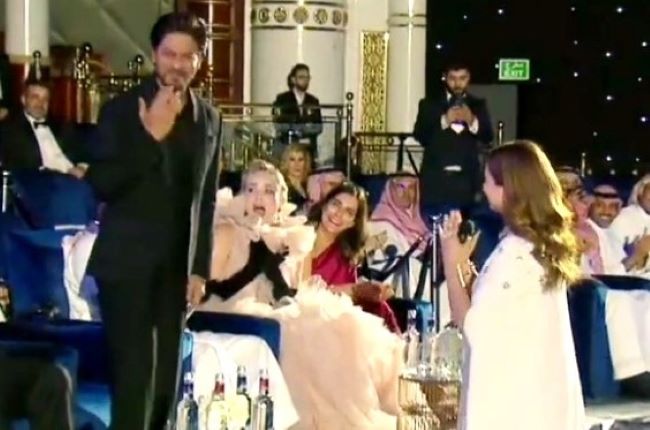 Mumbai, Dec 3 (IANS) Bollywood superstar Shah Rukh Khan, who recently attended the Red Sea International Film Festival, left the ‘Basic Instinct’ actress Sharon Stone gasping at the event after she realised that it was him who was sitting next to her all the while.

The ‘Pathaan’ actor was recently honoured at the fest for his contributions to the Indian cinema, as his name was announced and he stood up, Sharon was in total disbelief upon noticing him. In a video which is going viral on social media, Sharon can be seen clapping and seemed to mouth “oh my god”.

In response to Stone’s reaction, SRK can be seen humbly greeting the actress with a ‘salaam’.

SRK fans have since then been going gaga over the clip. One fan wrote, “My favorite part of today’s event, Sharon Stone’s reaction when she realized Shah Rukh Khan is sitting next to her.. We can’t blame her, can we?”

Another one wrote, “Reaction of Sharon Stone is what this man @iamsrk earned from all across the world.”

SRK was awarded an honorary award at the festival. SRK’s ‘Dilwale Dulhania Le Jayenge’ co-star Kajol too was present at the event in Saudi Arabia along with Oscar and Grammy-winning composer AR Rahman. SRK and Kajol had a special surprise in store for their fans. The two graced the stage together and recreated their ‘Dilwale Dulhaniya Le Jayenge’ moments.

On the work front, SRK will be seen in the spy-thriller movie ‘Pathaan’ from the house of Yash Raj Films, the film is set to land in cinemas on January 25, 2023.

Kajol on the other hand is gearing up for her upcoming movie ‘Salaam Venky’ which releases in theatres on December 9, 2022.