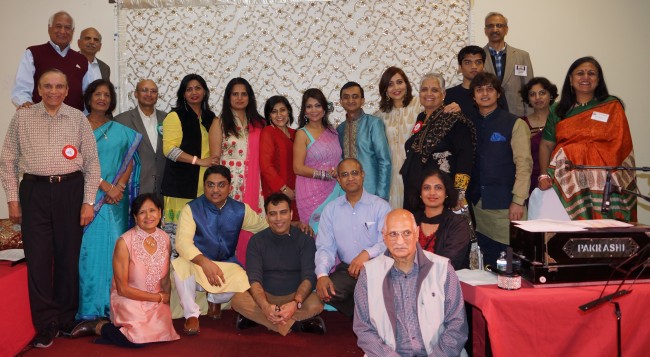 Atlanta, GA, December 8, 2017: Despite cold and windy weather, nearly 300 people gathered in a jam-packed hall in Global Mall on Saturday, November 11, 2017, to enjoy and support the “Shaam-E-Sangeet” fundraiser for Ekal Vidyalaya of USA.

After the attendees enjoyed a delicious dinner prepared by Monika Kumar, they were warmly welcomed by Preeti Tanwar and Neetu Chauhan who emceed the show. Shailesh Lakhtakia, Consul (HOC, Protocol) at the Consulate General in Atlanta, lit the lamp along with Geet Rung School’s Founder/Dir. Divya Srivastava and Ekal Vidyalaya GA Chapter President Shiv Aggarwal. This was followed aptly by Ganesh Vandana, a dance invocation for seeking blessings for the program by students of Geet-Rung.

A picture is worth a thousand words, and Ekal’s DVD and later PowerPoint presentation showed its one-teacher- school model in action. In the DVD, Prime Minister Narendra Modi lauded Ekal for “a very successful mission” and recognized the wonderful work in the 58,672 schools providing basic education to nearly 1.5 million rural children, with an almost equal boy-girl ratio.

Divya Srivastava, Founder & Director of Geet-Rung who has always extended her undying support to Ekal, had once again put in the tremendous effort and energy to put this show together, which was reflected as the program unfolded. Music students trained by Pankaj Bhargava of Geet-Rung opened the evening with Suraj Ki Garmi Se, a melodious bhajan sung originally by Sharma Bandhu for Parinay movie. Atlanta’s well known and versatile singer Sunny Sachdeva presented Geet-Rung’s artists. Pankaj Bhargava, Saras Jain, Indrani Danave & Anita Gupta enthralled the audience with a medley of ever-green songs. Anita set the tone with her Aaiye Meherbaan. Saras Jain, a Sangeet Prabhakar and trained Hindustani Classical vocalist effortlessly did full justice to demanding songs like Mere Mehboob Tujhe, and Arijit Singh’s numbers in his inimitable voice. Pankaj Bhargava, who has been associated with Ekal for several years, had the audience humming to his Dil Aaj Shaayar, Ae ajnabi tu bhi kabhi, a medley of Kishore Kumar songs picturized on the evergreen actor Dev Anand, to name a few. Indrani Danave sang Paani Paani Re, Chalo Tum Ko Lekar and Mere Dholna Sun, to which intricate footwork, soulful expressions and graceful movements were added by the dancers. The duets were also well chosen and showed the versatility of every artist. Sunny not only emceed a segment but also sang Yoon Rutho Naa Haseena very well. The second segment of the program was live accompaniment by the instrumentalists, Shivprasad Kotagal  a Sangeet Visharad from Baroda Music of college on Tabla, Gaurav Bhagat on Guitar and Pankaj Bhargava on Harmonium. This segment generated more excitement in the audience with the melodious renditions of Kal Chaudhveen Ki Raat Thi by Pankaj, Ranjishe hi sahi by Saras, Aaj jane ki zid na karo by Indrani and the fast paced Qawalis to peak the climax.  After more vintage songs and captivating dances to the live singing, the upbeat final medley of all-time disco favorites made the audience not only clap in unison but also pulled them on the dance floor! Sound engineering was very well taken care of  by Joji of Divinity AV. 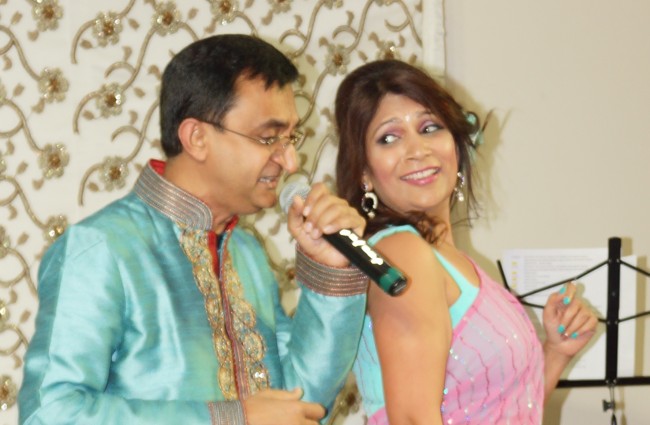 The Ekal program of free basic education for children has been expanded to formalize vocational training, social empowerment and healthcare for adults. It has thus brought about far-reaching changes in neglected areas of India. It is the largest grassroots non-government organization with chapters in Australia, Canada, Dubai, New Zealand, United Kingdom and United States (42 chapters).

Once the attendees realized the huge social impact their monetary contribution would make, they vied with each other to sponsor Ekal schools. As soon as 80 schools had been donated by individuals, Pravin Kakadia, a long-time sponsor and volunteer announced he would match the next 11 with his own 11 schools ($4015). “Shaam-E-Sangeet 2017” didn’t stop at 101, but raised 119 schools in one night!

Esha and Kunal Sajjan had stayed up late and created art and craft work especially for the event and offered all sale proceeds to Ekal. With these 119 schools, Ekal is slowing inching towards its goal of 100,000. Shiv Aggarwal, Ekal Atlanta Chapter President, thanked the talented and compassionate artists, students, sponsors, donors, volunteers, VHPA for the much-needed hot chai, and all supporters for joining the Ekal family.

Sponsors can track the progress of their school at www.ekal.org, can connect with Ekal on Facebook or Twitter also.