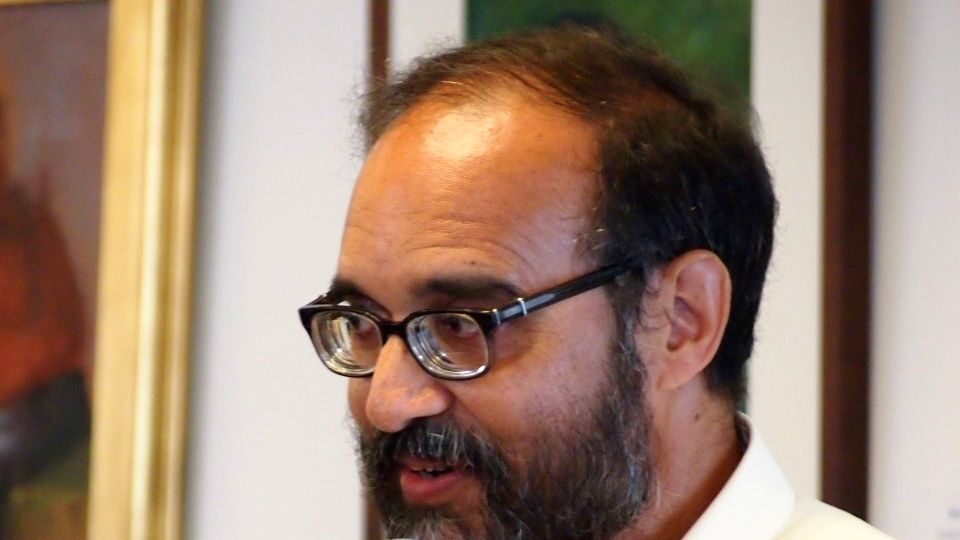 New York, Oct 29 (IANS) There are two Indian-origin candidates running for the US Vice President in the November 3 election — Democrat Kamala Harris and Sunil Freeman, who is on the ticket of the Party for Socialism and Liberation (PSL).

While Harris has been in the limelight, often reviled by President Donald Trump as a socialist, Freeman is the candidate with a solid socialist agenda.

Freeman’s mother Flora Navita is from India and his parents met while she was a teacher at a refugee camp in Varanasi in the aftermath of the Partition.

His father, Charles Freeman, was visiting India as a member of an American peace group.

He said in an interview with IANS that his mother always wore a saree and although living in the US for decades retained her Indian citizenship.

She grew up in New Delhi and in Lucknow where she graduated from the Isabel Thoburn College.

Sunil Freeman, who grew up in the Washington area, said that his visit to India as a 10-year-old was “the most powerful experience of my life”.

He described the PSL as communist, but it did not believe in the violent overthrow of government and was committed to bringing about change within the law.

“We are a communist organisation, we see socialism as step towards the communist society, but it’s a long, long process.

“We’re looking for socialism in which the workers are controlling the means of production and use those for the better a society.

“We don’t call for violence, we will work within the existing system of laws,” Sunil Freeman added.

He asserted that there was growing interest in socialism in the US driven by increasing inequalities, the inability of millions to get health care, and the climate crisis for all of which capitalism does not have viable answers.

The PSL describes itself on its website as a “revolutionary Marxist party”.

The party’s presidential candidate is Gloria la Riva, a firebrand activist who has been contesting presidential elections since 2008.

Freeman’s entry in the race demonstrates the emergence of Indian-Americans across the political spectrum, from the left to the centre and to the right, where Nikki Haley, the first cabinet member of Indian descent stands.

In the US election system, parties have to qualify separately in each state by meeting local requirements for the presidential race.

PSL will be on the ballot only in 14 states, including California, New Jersey and Illinois, and will be recognised in 14 others, including New York, as a “write-in” ï¿½ voters can write the candidates’ names on the ballot and have them tallied.

More than one party can nominate the same candidates and he and la Riva will also appear in some states as candidates of the Peace and Freedom Party and the Liberty Union Party.

Sunil Freeman was the second choice for the PSL vice-presidential slot after a Native American activist, Leonard Peltier, who in a federal prison, withdrew on health grounds.

Peltier was convicted of murder in the death of two federal law enforcement officers during an encounter between them and some Native Americans in their territory known as a reservation in 1975.

Sunil Freeman said that his mother was one of the early inspirations for his activism telling him about her work in the refugee camps and about facing racism at her school which had British and fair-skinned Indian students in pre-Independence India.

She was taunted as a “blackey” by them and when she retaliated by shouting back “whitey”, the school authorities “very seriously reprimanded her” and said that she could not call them names while condoning their name-calling, Freeman said.

His father, who is White, grew up for some time in the American South when racism was legally upheld in most places there through segregation laws.

But Charles Freeman’s family was progressive and opposed racism, he said.

His father belonged to the Quakers, also known as Society of Friends, which is a non-proselytising Christian sect deeply committed to non-violence and resistance to wars.

When he met Flora Navit, Charles Freeman had been in India as a member of the American Friends Service Committee, the Quaker-affiliated group that promotes peace and development.

In a parallel to Harris, who recalls being taken as a child to anti-racism protests by her parents, Sunil Freeman said that among his early memories were marching with his family in anti-war protests when the US was waging war in Vietnam and against racism.

He is sceptical about Harris, who he said as a prosecutor in California “used her power against the poor and working class people. She was a very harsh prosecutor, and at the same time, she did not prosecute mostly people who should have been prosecuted or investigated”.

Sunil Freeman said that he lived in India for two years as toddler and again for a year in 1965 as a 10-year-old when his father had a year-long assignment in India.

“My grandmother lived with us and I got to know my two Indian uncles,” he said, adding that landing at the then-Bombay airport “on day one I just felt like I was home, it was the most powerful experiences of my life”.

Sunil Freeman, 65, retired after working for an organisation called Writer’s Circle in a Washington suburb.