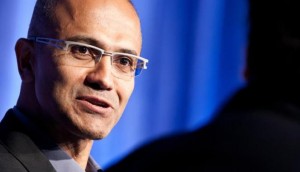 Washington, March 28 (IANS) In his first public appearance as the new Indian-American CEO of Microsoft Satya Nadella made a break from the company’s long-standing Window-centric world view to unveil Office suite for rival Apple’s popular tablet iPad.
“It’s a beautiful set of applications,” said Hyderabad-born Nadella, only the third CEO in the software giant’s 39-year history after founder Bill Gates and Steve Balmer, whom he replaced Feb 4.
For some, the move “represents a moment where the new Microsoft bids goodbye to the old Microsoft,” commented technology site CNet calling it “a calculated risk that Microsoft’s support of a major rival’s competing tablet will work to its advantage.”
“The hope is that enough iPad users will forgo free alternatives such as Google Docs and Apple’s iWorks software, and so compensate for potentially lost sales of its own Windows-based Surface tablets,” it said.
When Ballmer was in charge, Microsoft hewed closely to a Windows-centric view of the world in which the fate of its operating system dominated the company’s decision-making process, CNet noted.
Nadella is aware that Microsoft faces skepticism as many iPad users already use inexpensive products that offer features similar to Office, it said.
But a product from Microsoft would be expected to provide better compatibility with Office on PCs than any third party can provide, CNet said.
“The real goal for us is to set up to provide the apps and services that empower every user across all of these devices and experiences,” Nadella was quoted as saying. “That’s perhaps the job number one that we do: To empower people to be productive.”
“It’s not a trivial port,” Nadella told CNET after the announcement in San Francisco. “One of the things we wanted was to do this with particular care and focus.”
“I still think it’s in the early days. I understand that anything can be done quickly but we wanted to do it right.”
In Microsoft’s last fiscal year ended in June 2013, the Office-dominated business division accounted for more than $16 billion of Microsoft’s nearly $27 billion in operating profits.
For its part, Apple is “excited” that the software is coming to its ecosystem. “We’re excited that Office is coming to iPad,” Apple spokesperson Trudy Muller told CNET in an email.
Still, it’s a new addition to many existing productivity apps already available for the tablet, like iWork, Evernote,
and Paper by FiftyThree, she said.

US announces sanctions on Gupta brothers of South Africa